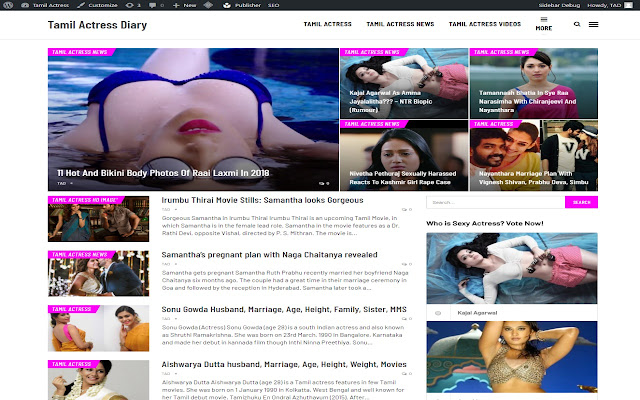 Description from store Tamil actress name list with photos has become an important outline in the field of Kollywood industry. Among the Indian Cinema industries, Tamil Cinema Industry is no way smaller and makes a significant portion of the Indian Cinema. With respect to the Tamil Cine artists, Tamil actress plays a vital role in the movies, while even the whole movie story is dedicated and screen played to match the actress performance. Tamil cinema audience has seen an enormous number of Tamil actress from the age 1920 – 2018, while still, the Tamil actress name list with photos is on the quest. Since the south actress’ fame is keeping on growing, here is the name list of the Tamil actress with hot images. Anushka Shetty The first Tamil Heroin in the Tamil actress list is Anushka Shetty (age 36), born on 7 November 1981 and got a nick name ‘Bahubali actress’ for the movie Bahubali/Bahubali 2 (2015-2017), portraying the role Princess Devasena. Anusha Shetty is one of the tall and hot Tamil actress in the field of Tamil Cinema and grossed over $ 1 Million at the USA Box Office Bahubali II has become the highest grossed movie of Indian Cinema of all time. Samantha Akkineni Samantha Akkineni (age 30) was born as Samantha Ruth Prabhu on 28 April 1987 and recently got married to Naga Chaitanya. Samantha is a Tamil heroine, casts roles, mainly in Tamil and Telugu movies. Though Samantha is a Malayali, she speaks Tamil fluently, since she was brought up in Pallavaram, Chennai. Samantha made her debut in Vinnaithaandi Varuvaayaa (2010), directed by Gautham Menon and Music direction by A.R. Rahman. Trisha Krishnan Trisha is one of the leading and senior Tamil actress in the South Indian Cinema Industry, being in the profession for more than 17 years. Trisha (age 34) was born on 4 May 1983 and started her career in 1999. Some of her box office hits in Tamil cinema are Saamy (2003), Ghilli (2004), Aaytha Ezhuthu (2004), Abhiyum Naanum (2008), Vinnaithaandi Varuvaayaa (2010) and Yennai Arindhaa (2015). Trisha won the Miss Madras contest (1999), which then became easy for her to enroll her name in the Kollywood actress list. Kajal Agarwal Kajal Agarwal is one of the powerful South Indian actress and a Kollywood celebrity, having the profession of Acting, Modelling and Singing. Kajal Agarwal (age 32) was born on 19 June 1985 and made her debut in Tamil cinema titled Pazhani (2008) directed by Perarasu’s. But, kajal’s role was not recognised and the movie was returned an average revenue. Naan Mahaan Alla, Maattrraan, Thuppakki, Jilla and Mersal are some of the Tamil box office hits for Kajal Agarwal. Tamannaah Bhatiya One of the prominent South Indian actress in Tamil film industry is Tamannaah Bhatiya. Tamannaah (age 28) was born on 21 December 1989 and gained huge popularity through the massive box office hit movie, Bahubali: The Beginning and Bahubali: The Conclusion. Tamannaah Bhatiya also endorses products like Celkon Mobiles (acted with Virat Kholi for the Ad.,), Fanta, Chandrika Ayurvedic soap, Sun direct, Shakthi Masala. She is also a brand ambassador for Khazana Jewellery and Beti Bachao, Beti Padhao campaign, organised by the government. Nayanthara Nayanthara is one of the top three Tamil actresses in the Kollywood zone and made many box office hits. Nayanthara (age 33) was born as Diana Mariam Kuriyan on 18 November 1984 and she had acted with all the leading Tamil actors of the industry in a short span of time. Nayanthara won both Filmfare Award for the Best Tamil actress and Telugu Actress. Billa (2007), Raja Rani (2013), Arrambam (2013), Thani Oruvan (2015), Maya (2015), Naanum Rowdy Dhaan (2015) are some of the commercial hit Tamil movies of Nayanthara. Surbhi Surbhi (age 24) is an Indian actress made her debut in the Tamil film Ivan Veramathiri (2013), directed by Saravanan. Surbhi was born on 5 June 1993 and predominantly features in Tamil and Telugu movies. Her presence was noted for her cute smile in the movies Ivan Veramathiri and Velaiyilla Pattathari. Rakul Preet Singh Rakul Preet Singh (age 27) is an Indian actress and appears in Tamil, Telugu and Kannada movies equally. Rakul Preet Singh was born on 10 October 1990 in a Punjab family and marked her presence strongly in the Spyder (2017) and Theeran Adhigaaram Ondru (2017). She recently bought a new apartment in Hyderabad worth ₹3 crore rupees. Rakul Preet Singh Height, Weight, Husband, Family, Age Aditi Balan Aditi Balan (age 27) has become a Tamil actress after doing a lead role in the movie Aruvi (2018). She received a gold chain as a gift from the veteran Tamil actor, Superstar Rajnikanth for her performance in the movie Aruvi. In an interview, Aditi Balan said that she was in fear for the first 3 months during the shooting of Aruvi. Sanchita Shetty Sanchita Shetty is an Indian film actress, popularly seen on the silver screens of Tamil and Kannada films. Sanchita Shetty’s performance in the movie Soodhu Kavvum (2013), depicting an imaginary sporty girl of Vijay Sethupathi gained wide popularity. Tanya Ravichandran Tanya Ravichandran (age 21) is one of the young and upcoming Tamil heroin in the Kollywood industry. Tanya was born on 20 June 1996 in Chennai, Tamil Nadu, India as Abbirami Sriram and changed her name as Tanya Ravichandran for the acting profession. Balle Vellaiyathevaa (2016), Brindavanam (2017) and Karuppan (2017) are some of the popular Tamil movies of the actress