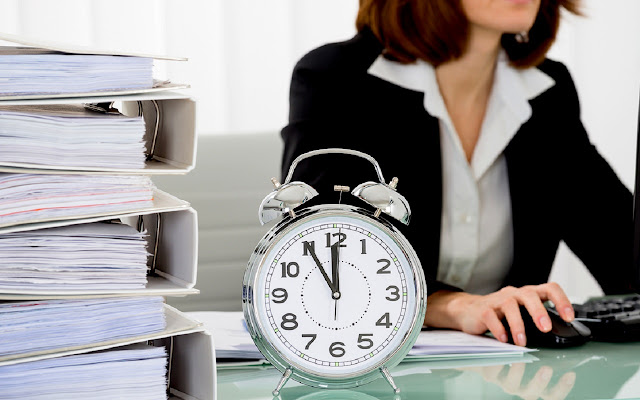 Description from store The structure of the work week varies considerably for different professions and cultures. Among salaried workers in the western world, the work week often consists of Monday to Friday or Saturday with the weekend set aside as a time of personal work and leisure. Sunday is set aside in the western world because it is the Christian sabbath. The traditional American business hours are 9:00 a.m. to 5:00 p.m., Monday to Friday, representing a workweek of five eight-hour days comprising 40 hours in total. These are the origin of the phrase 9-to-5, used to describe a conventional and possibly tedious job.[32] Negatively used, it connotes a tedious or unremarkable occupation. The phrase also indicates that a person is an employee, usually in a large company, rather than self-employed. More neutrally, it connotes a job with stable hours and low career risk, but still a position of subordinate employment. The actual time at work often varies between 35 and 48 hours in practice due to the inclusion, or lack of inclusion, of breaks. In many traditional white collar positions, employees were required to be in the office during these hours to take orders from the bosses, hence the relationship between this phrase and subordination. Workplace hours have become more flexible, but even still the phrase is commonly used. Several countries have adopted a workweek from Monday morning until Friday noon, either due to religious rules (observation of shabbat in Israel whose workweek is Sunday to Friday afternoon) or the growing predominance of a 35–37.5 hour workweek in continental Europe. Several of the Muslim countries have a standard Sunday through Thursday or Saturday through Wednesday workweek leaving Friday for religious observance, and providing breaks for the daily prayer times