This extension themes your new tab with HD wallpapers from the upcoming animated Pixar and Disney Studios film Coco! 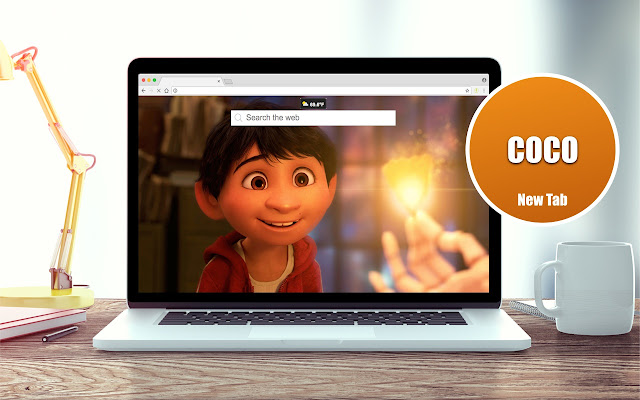 Description from store Install this new tab extension to get HD wallpapers from the upcoming animated Pixar and Disney Studios film, Coco! Just in time for Day of the Dead and Halloween! Coco is an upcoming American computer-animated musical fantasy film produced by Pixar Animation Studios and released by Walt Disney Pictures. Based on an original idea by Lee Unkrich, it is being directed by Unkrich, and co-directed and co-written by Adrian Molina.[4] The story follows a 12-year-old boy named Miguel who sets off a chain of events relating to a century-old mystery, leading to an extraordinary family reunion. The concept of the film is based on the Mexican holiday of the Day of the Dead. The screenplay was penned by Adrian Molina and Matthew Aldrich, and the story by Unkrich, Jason Katz, Aldrich & Molina. Pixar began developing animation in 2016. Unkrich and some of the film's crew members also visited Mexico for inspiration. The skeletons in the film were redesigned to be more appealing. Composer Michael Giacchino, who had worked on prior Pixar animated features, will compose the score. #skeletons #pixar #kidsmovie #animated #movies Please Rate Us! If you feel we don’t deserve a 5-star rating, PLEASE email or call us FIRST! We want to hear from you! [email protected] or 614.321.9316 *A high-res new tab experience *Simple, highly visual layout, removing tiles from view *Direct, convenient web search and features from a New Tab page We have over 300 new tab experiences to choose from, see our MyWeb extension to get access to all of them.