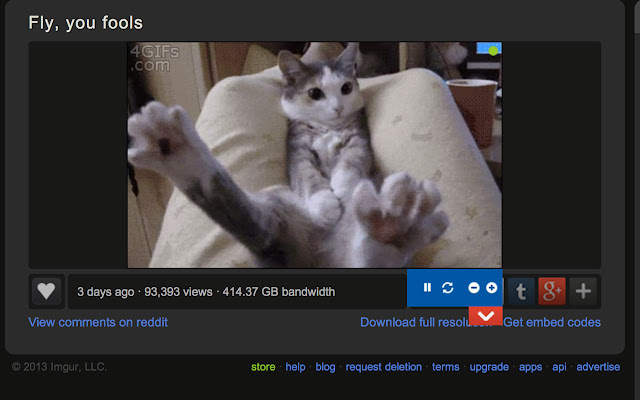 Description from store Works with Reddit Enhancement Suite! Chrome extension that replaces gifs hosted by imgur to HTML5-optimized video converted and hosted by gfycat. Gfycat is a gif optimization service that compresses gifs into HTML5 videos, where they can enjoy lower file size, GPU acceleration (great on mobile!) and pause/play/seek. This extension will modify anchor links to gfycat.com/fetch links, which transcode & show the gif after transcoding. `img` tags with a gif hosted on imgur will trigger a `transcodeRelease` action, which will cause the gif to be transcoded on gfycat's servers if it hasn't already. To improve the user experience, gifs are only replaced with gfycat videos if they are already transcoded on gfycat's servers. Otherwise, the original gif is shown. As soon as one user - anywhere - views that gif on gfycat, all users will see the transcoded version when using this extension. CHANGELOG ======== v1.4.7 ------ * Fix a MutationObserver spec change leading to an error on new browsers. v1.4.6 ------ * Prevent extremely small erroneous autoresizing caused an interaction with RES. v1.4.5 ------ * Fixed a bug where a GIF displayed smaller than its original size via CSS would cause the converted gfy to have a size ceiling. v1.4.4 ------ * Gfys will now be the correct size when replacing a GIF that has been manipulated via CSS to be smaller than its original size. v1.4.3 ------ * Gfycat videos can now be reverted back to GIFs via the right-click menu. v1.4.2 ------ * Fixed broken google pagespeed lazy loading. v1.4.1 ------ * Doubleclicking gfycat controls will no longer cause the zoom level to change. * Fixed a control display issue in comment threads caused by an RES change. v1.4.0 ------ * Fixed a bug where the original gif would annoyingly show up before the gfy loaded. * Made gfycat controls much more usable and eliminated padding animation on hover. * Fixed a bug where you would resize the gfy on right/middle click. * Improved album performance and started caching gfy urls. v1.3.3 ------ * Further fixes to RES galleries. They should work well front to back, now. * Tweaks to make gfy drag resizing a lot less annoying. v1.3.2 ------ * Fixed a bug where gifs would stop animating if they were not loadable from Gfycat. * Now displaying an error when a manual conversion fails (error from Gfycat API). v1.3.1 ------ * Added support for minus.com, photobucket.com, and lots more. See the complete list at https://github.com/STRML/Imgur-to-Gfycat/blob/e39509b64358514c554e1c49f22c9ce75c02d782/Source/imgur-to-gfycat.js#L12 * Fixed RES album support. v1.3.0 ------ * Added context menu support for converting files that may have been missed, such as non-imgur gifs or gifs with incorrect extensions (such as the many gifs with the .jpg extension on /r/gifs) v1.2.0 ------ * Gfycat gifs/videos can now be dragged to resize, much like images in RES. Doubleclick to restore the original size. v1.1.3 ------ * Fix clicks on gfycat controls opening a new tab when the gfy is surrounded by an anchor (RES, etc). * Prevented execution of gfyembed.js unless a gif needs conversion. Should fix some previous weird issues with other sites, e.g. YouTube. v1.1.2 ------ * Fix gfycat.com/fetch urls breaking when this extension is active. v1.1.1 ------ * Convert all eligibble anchor links to point to gfycat if a gfycat url has successfully been resolved. * Fix gfycat controls overflowing in RES. v1.1.0 ------ * Fix some issues with incorrect navigation when using RES. * Prevent loading of original gifs to save bandwidth if they are going to be replaced anyway. v1.0.0 ------ * Initial release.