Listen to your web 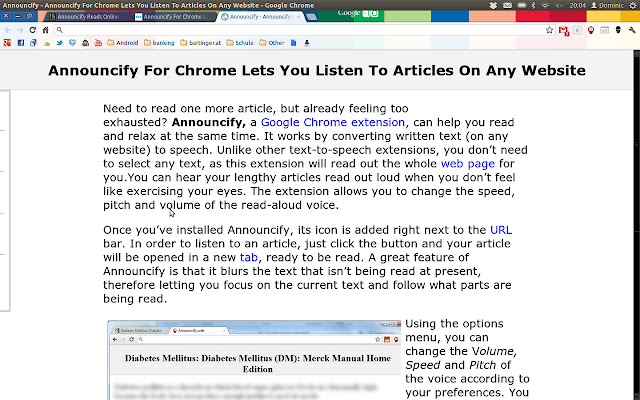 Description from store After Announcify conquered Android™ phones, it's now here to announcify your life at Google Chrome™. Announcify reads out loud every website you want. For example, if you're too tired but still need to study one more Wikipedia entry, Announcify can help your tired eyes relax. What others say about this extension: "This is a handy extension that will let you rest your tired eyes and at the same time, let you learn new stuff. This extension is similar to Chrome Speak that we previously covered, but is much easier to use, as it automatically reads out the entire page without requiring you to select text, so sit back and relax and listen to all those lengthy articles with Announcify." - AddictiveTips, http://goo.gl/LwSuG "Announcify is free and really handy for those times when your eyes are too tired but you're still eager to read." - Lifehacker, http://goo.gl/5xRPE This extension was built during the GTUG Vienna Chrome Hackathon on 29.10.2011 together with Dominic Bartl and Kariem Hussein. It's made possible by technology provided by Diffbot (http://www.diffbot.com/) - thank you! This extension is open source. More information at http://announcify.com/ Google Chrome™ browser is a trademark of Google Inc. Use of this trademark is subject to Google Permissions.

Webster:- Create and Manage your own Web
2
5