A read-only, web-enabled version of KeePass. 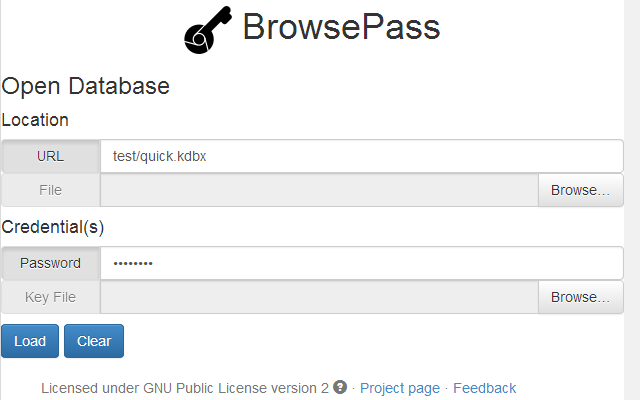 Description from store IMPORTANT: Please ONLY report issue at https://bitbucket.org/namn/browsepass/issues. I cannot reply you in Chrome Web Store. BrowsePass reads KeePass (http://keepass.info) password database file (only version 2). It can open both remote and local files. You'd use BrowsePass when you cannot install or download KeePass locally. BrowsePass runs entirely in your browser, no additional software is needed. BrowsePass DOES NOT support files created with KeePass version 1 (KDB files)! Version 0.8.1 fixes a bug where the Copy button may not show. Version 0.8 migrates from Chrome App to Chrome Extension due to https://blog.chromium.org/2016/08/from-chrome-apps-to-web.html. Version 0.7 supports binary attachments. Version 0.6 supports Google Drive for both the vault, and key files. Hopefully, you would only store either one on Google Drive. Version 0.5 offers major improvements to the UI. Version 0.4.2 has minor UI change to show the fields in the same order as KeePass. Version 0.4.1 fixes a hang issue when no URL and local file are provided. It also adds a direct link to the issue tracker. Version 0.4 adds search functionality. Users can now search for entries based on their URLs and titles. Version 0.3 adds these features: - passwords are hidden by default - when shown, passwords are automatically selected for copying - (BrowsePass core takes its anchor URL as the URL to KDBX file. It's now possible to do http://domain/browsepass.html#http://another/file.kdbx) Version 0.2.1 adds the vertical scroll bar to the app. Version 0.2 adds or fixes these: - file chooser - text selection and copying