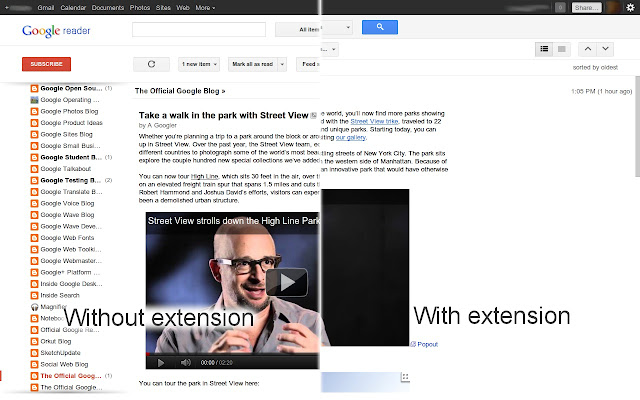 Description from store Google recently released an update to Google Reader that, in addition to removing the social features, redesigned the interface. Many users are displeased with the new look, so this extension offers several improvements. It removes unnecessary padding and brings some color back into the new gray UI. Some of the things this extension “fixes”: - Less padding in the header, sidebar, toolbar, and menus - Gray header to match other Google products - Narrower sidebar - Links are blue instead of gray - The currently selected item is indicated with color instead of a shade of gray Overall the result is a less dull Reader experience with less space taken up by interface and more room for your content, which is what Reader is all about. The reason for the long permissions list is simply to access Google Reader in all countries. Updates: - Update 18 fixes an uncaught manifest error that prevented updating. - Update 17 fixes the Google Bar covering the top toolbar, adds support for many TLDs (e.g., “.fr” or “.co.uk”) instead of just “.com”, and upgrades to manifest_version 2. - Update 16 fixes some icon alignment issues in list view. - Update 14 fixes some bugs with the new Google Bar. - Update 13 adds support for the new Google Bar (youtu.be/vSIMpFfNLEA). - Update 11 decreases the size of and space around feed titles on the Home page. - Update 10 removes the white box around the logo. - Update 7 removes more unnecessary padding from the sidebar. - Update 6 fixes full screen mode and supports list view. Also try: Compact Density for the new Google Bar: http://goo.gl/lLlOV Compact Density for Google Contacts: http://goo.gl/mSuHp Compact Density for Google Docs: http://goo.gl/bcWAz Compact Density for Google Voice: http://goo.gl/leabq