Find, mute or show the current hashtags in your stream and show in middle bar 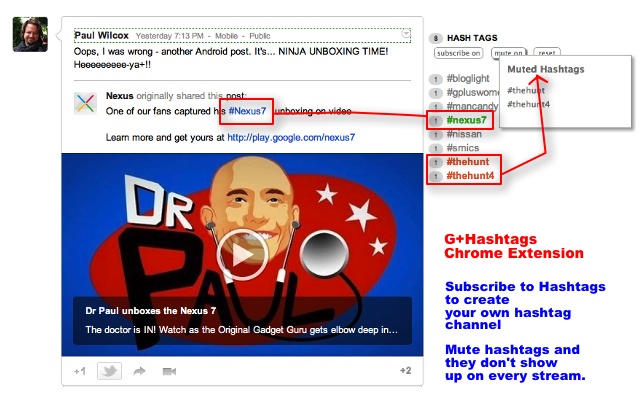 Description from store Google+ Extension to find, mute and show the current hashtags in your stream. The extension shows the hashtags in your Google+ stream in the middle bar (white bar). Hashtags are listed with counts and can be muted or subscribed. Muting hashtags bans the hashtags from your stream, so you don't see the posts with these hashtags anymore. You can mute on or more hashtags. Subscribing hashtags creates a unique stream with only posts that contain your subscribed hashtags. You can subscribe one or more hashtags. Muting and subscribing can be temporarily switched on or off to see the original stream or just the stream based on muted/subscribed hashtags. New in Version 0.49.1 - Bugfix because of G+ update - Remove hashtag mark and show hashtags as buttons (experimental) - Bugfix for view window of hashtag posts The extension is still beta. Feedback and Review very much welcome. v 0.48.0 - Smaller list of hashtags with more button, speedups and better view handling v 0.47.1 - Speed optimizations for better performance v 0.47.0 - Pin the hashtag widget to the top of the middle bar v 0.46.0 - View button for hashtag posts v 0.45.7 - Fixed a quirk because of a small G+ layout change v 0.45.6 - Fixed reset button and some layout fixes and new sort order for hashtags v 0.45.5 - Mute button fixed, some speedups, bug fixing (subscribing still off)

Don't Show Me This
7