Show humans.txt for the current website, if it exists (see http://humanstxt.org) 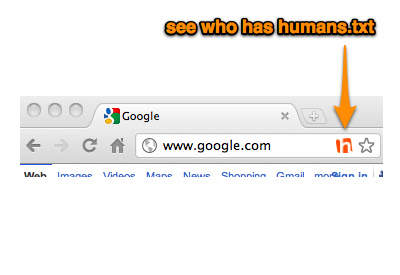 Description from store Humans.txt is a new standard in use by Google, Flickr, and many grassroots web developers. It's a way to recognize the humans who made a website, and the tools they used. This extension shows an icon in the address bar for sites using humans.txt, so you can discover it's available. Click on the icon to see the humans.txt file. Try it on http://humanstxt.org or http://google.com for example. Extension by Michael Mahemoff, Player FM (http://player.fm) and originally created while at Google. Update Jan 17, 2013 - Updated to use Chrome Manifest v2 - Supports https, with thanks to Starkov matmuchrapna (https://github.com/matmuchrapna) for the patch - Ensure min width and text wrapping - Improve footer Update June 26, 2011 Now using official humans.txt logo, and some other internal updates. Update March 31, 2011 Thanks for all your Twitter feedback since I launched this yesterday! The tool now filters for "text/plain" content types, which will remove a few false positives. It also now checks for humans only once per origin, instead of on every page load, and will respect port numbers too.