This extension is for instant notification of mindcracker uploads. 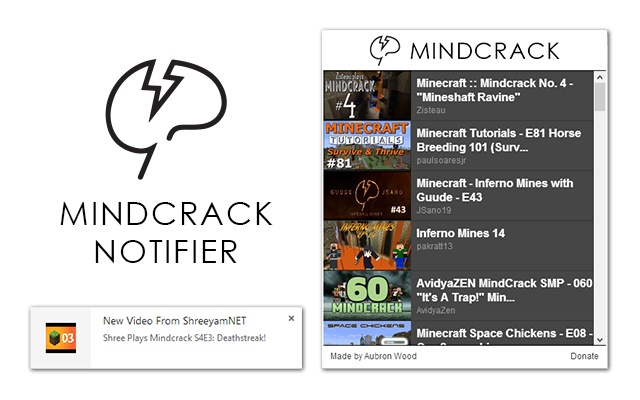 Description from store This is a simple extension to provide a feed of the 50 most recently uploaded videos from the Mindcrack LP group. It also displays the number of new videos since you last opened it as a number on the icon, and notifies you when a new video is uploaded (this is configurable in settings). Changelog: v1.8.0: Twitch Integration Blocks "via @YouTube" tweets, as they are simply repeats of youtube notifications. v1.7.2: Hotfix for twitter integration (4:25AM Edition) v1.7: Twitter integration! (Turn on in settings) v1.6: Can enable auto-expiring Updates. Light icon option for dark chrome styles. Can disable update notifications. v1.5: Reverted UHC Hype v1.4: eXV0dHVybWFjYQ== v1.3: * Change which Mindcrackers you do or do not want to get notifications for * Bugfixes v1.2: * Resolved an issue in which the red number would not update immediately. v1.1: * "New Videos" number in bottom right of icon now instantly clears when clicked on. v1.0: * Initial Release.