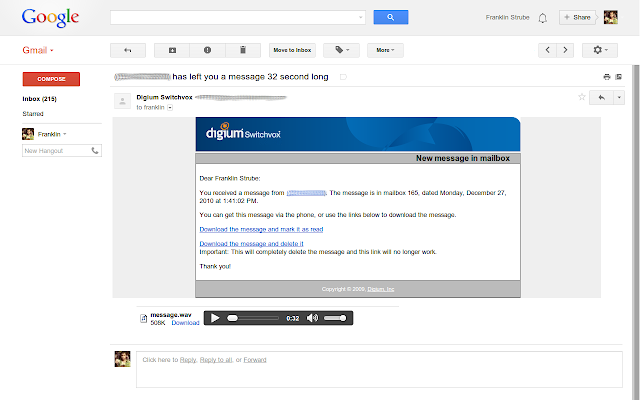 Description from store October 2 2013: New Release! Version 1.8.2 *UPDATE* Latest release attempts to fix reported issues of player not appearing. Please verify if this works for you! This extension will insert an html <audio> tag if the email contains a .wav file attachment so that you can play the message inline, without having to download it. This extension works great if you get your voicemail messages emailed to you in WAV format. *NOTE* GSM encoded WAV files are not supported by Google Chrome browser. If you are seeing the audio player, but it is "grayed" out or has a time of 0:00, then you are most likely running into this issue. Works with: Chromium 11.0.676.0 (75353) Ubuntu 10.04 Chrome 9.0.597.98 Windows XP Chrome 11.0.672.2 dev Mac OS X Gmail is a trademark of Google Inc. Use of this trademark is subject to Google Permissions. # Updates 1.8.2 - October 2, 2013 * Fixes player not appearing in Google Chrome on Mac / Windows 1.8.1 - September 30, 2013 * Fixes player not appearing in Google Chrome on Ubuntu