Yet another text formatting extension, because the others I tried didn't seem to work satisfactory. 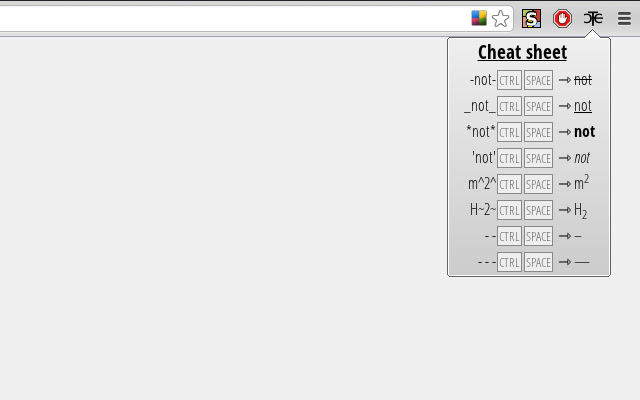 Description from store This extension allows you to format text in online rich text editors, such as Gmail[1] and TinyMCE[2]. The formatting is achieved using some simple syntax followed by a keyboard shortcut. This extension has two use cases: 1) You want to keep your fingers at the keyboard while formatting your text (instead of reaching for your mouse and clicking on buttons). 2) You want to use a formatting for which the rich text editor does not offer a button (try typing strike trough in gmail). Usage: The formatting is achieved by pressing <ctrl>+<space> after typing a certain trigger character. For instance: -hello-<ctrl>+<space> will make the hello appear in strikethrough. There is a popup cheat sheet with all formatting options when you click the extensions icon in the chrome toolbar. Note: It is not a goal for this extension to make it work for every rich text editor out there. It is currently only extensively tested in gmail. [1] - https://mail.google.com [2] - http://www.tinymce.com/tryit/full.php