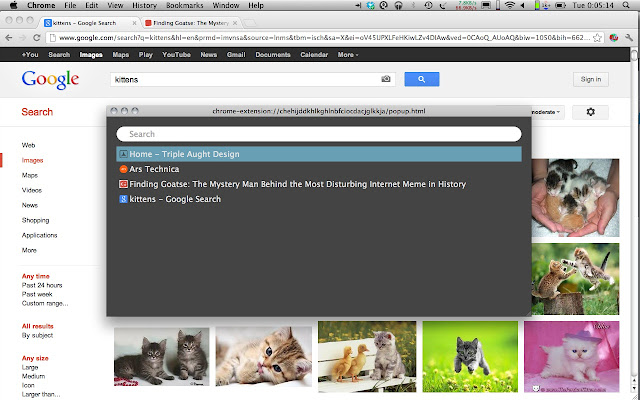 Description from store PowerSwitch is a tab switcher that lets you switch tabs instantly with your keyboard. Press command/control-k to open the list of tabs, type to filter the tabs, press enter to select one. This solves two problems: - you can pop over to a particular tab just by knowing its name. Lost your Gmail tab in ten windows with twelve tabs each? No problem: Just press command-k and type some of the name of the tab. - you can easily bounce between two tabs, the way that you can alt-tab between apps: command-k, enter. Version 2013.9.21 fixes bugs with full-screen windows and with not bringing a window to the front when switching tabs (apparently because of a change in Chrome's behavior) and removes the toolbar button. Now the keyboard shortcut is the only way to use PowerSwitch. Version 2013.4.2 fixes a bug that caused the list of tabs to be empty after loading certain kinds of tabs. (PowerSwitch is similar to Emacs' iswitchb and also to the Recent Files UI in IntelliJ.)