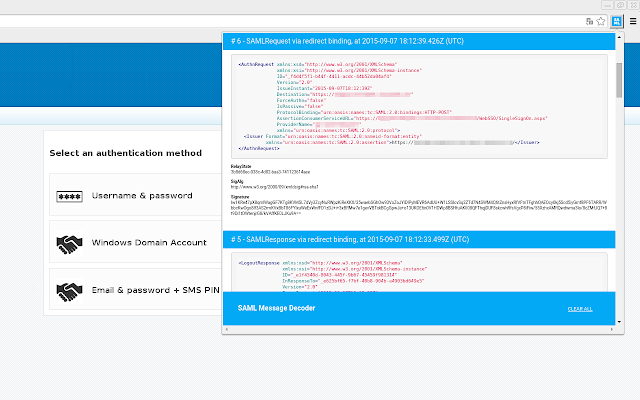 Description from store This tool helps you debug your SAML based SSO/SLO implementations. It runs in the background, collecting SAML messages as they are sent and received by the browser. When something didn't work as expected, just pop up the extension to view the latest SAML messages in cleartext (easily readable XML). This allows you see what happened, and to get an idea of how to solve those weird authorization issues. === Update 28 Nov/2017 === - Add support for EidSignRequest and EidSignResponse messages. === Update 26 Nov/2017 === - Remove the use of fullpage.js, as it never seemed to understand the dimensions of the Firefox popup window, and set the window height to zero most of the time. - The popup should load faster now. - Adjustments to make the extension look decent in the Firefox popup. === Update 8 Nov/2017 === - Fix an issue when parsing POST parameters containing additional parameters. === Update 7 Nov/2017 === - Fix an issue where large SAML messages (i.e responses with Assertions) weren't recorded. Caused by a recent Chrome update, where the POST:ed messages ended up in raw ArrayBuffers instead of in the usual FormData object. === Update 14 Aug/2017 === - Fix a bug causing the 'copy messages' toolbar not to show === Update 10 Aug/2017 === - Add functionality to copy one or more SAML messages to clipboard. === Update 07 Aug/2017 === - Rewritten from scratch - Right-click menu with a few options - Now supports exporting messages to .json file. Nice to have when you don't have access to the client's computer. They can now install this extension and send the export via mail for analysis. - Refreshed GUI, with option to scroll vertically or horizontally (using arrow keys).