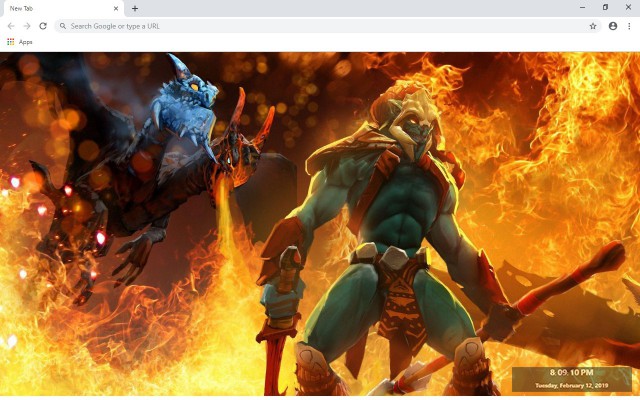 Description from store Are you ready to give your browser a new look with Dota 2 wallpapers and new tab extension? Dota 2 wallpapers and new tab extension will not only give a new look to your browser, but also you will get various features at your home page. Dota 2 wallpapers and new tab extension is absolutely free and you can uninstall it whenever you want. Feel free to take a look at our other extensions. Install Dota 2 New Tab & Wallpapers Collection and enjoy handpicked HD images of Dota 2. It comes with some cool properties that will improve your New Tab experience like: - High quality wallpapers with every new tab - Current Date/Time - Shortcut links to social networks and shopping websites We are going to add more feature for you to have better experience on your browser. It's a promise. If you liked the Dota 2 extension we suggest you to take a look our other extensions. You can reach these extension by visiting www.wonderfultab.com Dota 2 About : We originally reviewed Dota 2 in 2013. It has changed significantly since then, so much so that we decided to review it again. Our original review can still be found here. For more about why we’ve chosen to re-review certain games, head here. Given that it started life as a faithful recreation of the original Defence of the Ancients mod, you’d be forgiven for thinking of Dota 2 as the archetypical MOBA. Yet this isn’t the case: in practice, Dota 2’s purism sets it apart from the vast majority of games in this genre. What we think of as the MOBA really began with Heroes of Newerth and League of Legends—games that took that roughshod family of WarCraft custom maps and professionalised them, commercialised them, found them a form that would enshrine the MOBA at the top of the gaming world for the better part of a decade. Dota 2 is different. Adopted by Valve, that original mod became a tool for boosting Steam’s popularity in places where the service hadn’t reached the ubiquity that it enjoyed in Europe and North America—such as Russia, Southeast Asia and China, traditional strongholds of the DotA scene. And the best way to do this proved to be to remain steadfastly idiosyncratic. What this resulted in was a free to play MOBA where all of the heroes are free, where there are no account levels to grind, where design compromises imposed by the limitations of a noughties map editor have been embraced as design law. Dota’s leap from mod-scene darling to million-dollar phenomenon was whiplash-inducingly quick, its uncommercial credibility ripped away like a bandaid—so fast that you might not notice it was gone. What does this mean for you as a prospective player? Principally, it means that this is a dizzyingly deep competitive team strategy game whose core design benefits from fifteen years of unbroken refinement. It was in this strategic sandbox that the basic assumptions of the MOBA were established: two teams, three lanes, five heroes per team, towers, creeps, jungles, bases, and Ancients. On paper, your job is to lay siege to the enemy base and blow up the enemy ancient. In practice, your job is to manipulate the strategic, economic and psychological tempo of the match, a challenge whose variables change every time you play. You’ve also got to pick the right wizard, cast the right spells, and make sure they buy the right shoes. Obviously. This is Dota we’re talking about.