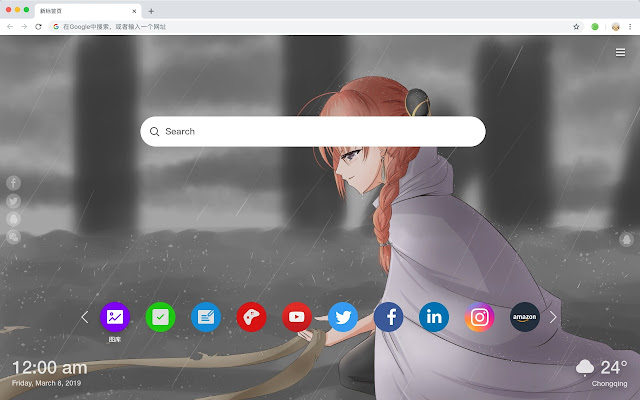 Description from store At the end of the Edo period, the mystery of the so-called "Heavenly Man" (あまんと) struck, and the war between man and heaven broke out instantly. A large number of warriors and devout devotees participated in the battle. After seeing the powerful strength of the heavenly people, the shogunate immediately bowed and gave up the samurai, and signed an unequal treaty with the angels to allow them to enter the country. Afterwards, the "Waste of the Scrap" was issued, so that the warriors had forgotten how to implement their own Bushido. Since then, the shogunate has been controlled by the celestial beings, forming a "political regime", causing corruption of rights, and gangs and villains are thus arrogant. In such an era, a man who still retains the soul of the samurai, Shimada Silver, and his companion Shimura New Eight, Kagura, run the Master House (as long as there is money and work to pick up), happily live a whimsical life. Gintama theme HD wallpaper new tab page. The hottest, most popular HD theme wallpaper page for users. Updated daily. The wallpaper can be changed automatically, and a new wallpaper will be automatically opened each time you open a new tab. The time display is more precise and the city location of the weather can be customized. Customizable minimalist mode, the most visited Chrome extension currently.