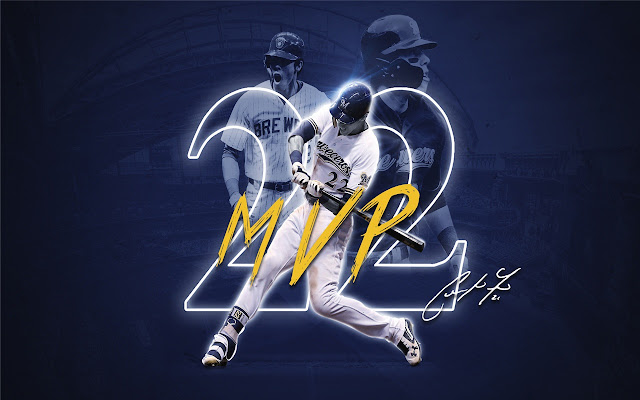 Description from store Christian Stephen Yelich (born December 5, 1991) is an American professional baseball outfielder for the Milwaukee Brewers of Major League Baseball (MLB). He previously played for the Miami Marlins. The Marlins selected Yelich in the first round of the 2010 MLB draft. He made his major league debut for the Marlins in 2013, and was traded to the Brewers in the 2017-18 offseason. Yelich won a Gold Glove Award in 2014, the Silver Slugger Award in 2016 and 2018, and the National League's Most Valuable Player Award in 2018. Yelich was born in Thousand Oaks, California, and attended Westlake High School. During his freshman year, he batted .373 with 25 hits and 16 strikeouts in 67 at bats. In his sophomore year, he batted .341 with 31 hits and 24 strikeouts in 91 at bats. During Yelich's junior year, he batted .489 with 46 hits and struck out 6 times. In his senior year, he batted .451 with 37 hits, nine strikeouts and nine home runs in 82 at bats. He was named Second Team All-American by Max Preps and was ranked 34 among the top 100 players in the nation in high school. On January 25, 2018, the Marlins traded Yelich to the Milwaukee Brewers for Lewis Brinson, Isan Díaz, Monte Harrison, and Jordan Yamamoto. Yelich was named to the 2018 MLB All-Star Game after batting .285 with 11 home runs, 36 RBIs, and 11 stolen bases. Yelich, a reserve for the National League, replaced Matt Kemp in left field and went 1-for-3, hitting a solo home run in an 8–6 extra-inning loss to the American League. On August 29, Yelich hit for the cycle against the Cincinnati Reds, collecting a total of six hits in the game. On September 2, Yelich hit his first career grand slam, in a game against the Washington Nationals. On September 17, Yelich hit for the cycle, also against the Cincinnati Reds, for the second time in 19 days, becoming the fifth player in MLB history to hit two cycles in the same season and the first player in MLB history to do so against the same team. Yelich played for the United States national baseball team in the 2017 World Baseball Classic. Following the conclusion of the tournament, he was named to the All-World Baseball Classic team. On September 10, 2018, he was selected to play with the MLB All-Stars at the 2018 MLB Japan All-Star Series, but he later withdrew from the event. Yelich appeared in an episode of Magnum P.I. that aired on March 4, 2019. Yelich once invited Cleveland Browns quarterback and 2017 Heisman Trophy winner Baker Mayfield to Brewers batting practice. Yelich's paternal grandfather is of Serbian descent.Yelich's maternal great-grandfather was American football player Fred Gehrke.[1] An uncle, Chris Yelich, played football for the UCLA Bruins. Yelich is the oldest of three children; his brothers are Collin and Cameron. Collin was selected by the Atlanta Braves in the 2015 Major League Baseball draft. Cameron is a United States Marine. His maternal grandfather is Japanese. Yelich grew up a Los Angeles Dodgers fan.