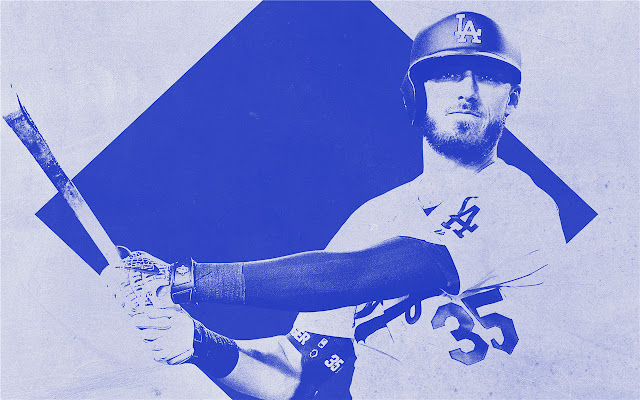 Description from store Cody James Bellinger (born July 13, 1995) is an American professional baseball first baseman and outfielder for the Los Angeles Dodgers of Major League Baseball (MLB). He was named an All-Star and the National League's Rookie of the Year in 2017. Bellinger is the son of Clay Bellinger, who also played in MLB. In his first season in the majors, Bellinger played in 132 games with a .267 batting average, 39 home runs, and 97 RBI.[43] He was selected as the Sporting News NL Rookie of the Year. He played in all 15 of the Dodgers games in the post-season, with a .219 batting average, three home runs and nine RBI. He also struck out 29 times in 64 at-bats. In Game 5 of the 2017 World Series, Bellinger came to bat in the fifth inning, and with two Dodgers on base, hit a home run. The three-run-home run temporarily put the Dodgers in the lead. He set the MLB record for most strikeouts in one postseason with 29 strikeouts, 17 strikeouts in the World Series alone. After the season, he was unanimously voted as the National League Rookie of the Year. Bellinger played in 162 of the 163 games of the Dodgers' 2018 regular season, appearing at first base (110 games, 85 starts), center field (78 games, 50 starts), right field (5 games) and left field (1 game). He led the team in hits (145) and multi-hit games (41), slashing .260/.343/.470 with a .814 OPS and 25 home runs, 7 triples, 28 doubles, 76 RBIs, and 14 stolen bases. He hit his first home run of the 2018 season on April 1, 2018, which was the 40th of his career, a milestone he reached in just 136 games, the third fewest games needed to hit 40 home runs, trailing Rudy York (129) and Mark McGwire (110) according to STATS, LLC. During the June 5–7 series against the Pittsburgh Pirates at PNC Park, Bellinger hit home runs in each of the 3 games of the series, then hit another home run against the Atlanta Braves at Dodger Stadium the following day, June 8, to complete 4 home runs in 4 consecutive games for the first time in his career. In the 2018 National League West tie-breaker game on October 1, Bellinger hit a 2 run home run in the bottom of the 4th inning. Bellinger appeared in all 12 of the Dodgers' Postseason games and was named the 2018 NLCS MVP after his 13th inning walk-off single in Game 4 and his go-ahead 2 run home run in the second inning of game 7 in the Dodgers defeat of the Milwaukee Brewers to win the 2018 National League Pennant. Bellinger got off to a torrid start in 2019, and on April 26 he hit his 13th home run of the season and set a new MLB record with 88 total bases before the month of May, a record previously set by Chase Utley with the 2008 Phillies. He also passed Matt Kemp for the Dodgers record for most home runs in that span. His 97 total bases, 37 RBI and 47 hits all established new major league records for before May 1, while his 14 home runs and 32 runs scored tied MLB records. He earned his first Player of the Month award in April 2019. His "hot start" wasn't just a fluke, as he carried a .400 batting average into mid-May and finished the first half in the top 5 in the NL in average, home runs, RBI, on-base percentage, slugging percentage, and OPS. He was voted as the right fielder for the National League in the 2019 All Star game and set a new Dodgers franchise record with 30 home runs before the All-Star Game.