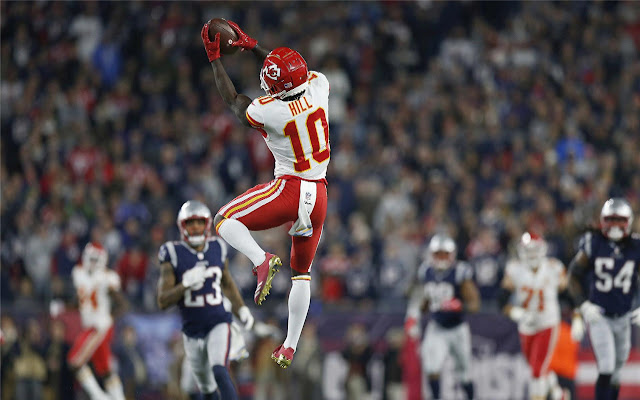 Description from store Tyreek Hill (born March 1, 1994) is an American football player for the Kansas City Chiefs of the National Football League (NFL). He attended Garden City Community College, Oklahoma State University, and University of West Alabama. Hill was primarily a return specialist as a rookie, but also contributed as a wide receiver and running back, but has since become the Chiefs' number one receiver, though he is still the team's punt returner. Following his rookie year, he received the nickname "Cheetah" as reference to his speed. The Kansas City Chiefs selected Hill in the fifth round (165th overall) of the 2016 NFL Draft. He was the first player from West Alabama to be drafted since 1974, when Ken Hutcherson was drafted 97th overall by the Dallas Cowboys. The Chiefs were criticized by fans for the selection due to his past issues with domestic violence and the Chiefs' history with former linebacker Jovan Belcher. General Manager John Dorsey had to receive consent from Chiefs' owner Clark Hunt to make the selection and says they thoroughly vetted the prospect which included speaking to the prosecutor that charged him. After drafting him, the Chiefs' held an impromptu press conference and addressed the issue to the media during the first day of rookie mini camp. On May 17, 2016, the Chiefs signed Hill to a four-year, $2.58 million contract that includes $100,000 guaranteed and a signing bonus of $70,000. Hill finished his rookie season with 61 receptions for 593 receiving yards and six touchdowns, 24 carries for 267 rushing yards and three rushing touchdowns, 14 kick returns for a total of 384 yards and a touchdown, and 39 punt returns for 592 yards and two touchdowns. He also appeared in all 16 games, had one start, and made seven combined tackles. Hill was named to the 2017 Pro Bowl as a return specialist. On January 6, 2017, Hill was named First-team All-Pro as a punt returner. He was named to the NFL All-Rookie Team for the 2016 season. He was ranked 36th by his fellow players on the NFL Top 100 Players of 2017.