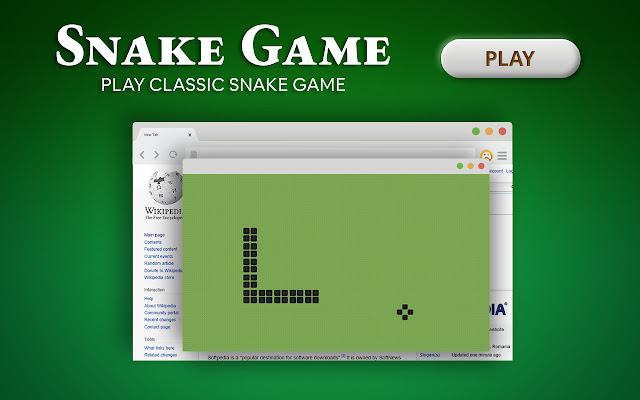 Description from store Welcome to the funniest and most addictive game ever - SNAKE GAME! With this extension, you can play the popular game directly from your chrome's new tab page and by opening the extension itself from it's icon. Snake is the common name for a video game concept where the player maneuvers a line which grows in length, with the line itself being a primary obstacle. The concept originated in the 1976 arcade game Blockade, and the ease of implementing Snake has led to hundreds of versions (some of which have the word snake or worm in the title) for many platforms. After a variant was preloaded on Nokia mobile phones in 1998, there was a resurgence of interest in the snake concept as it found a larger audience. The player controls a dot, square, or object on a bordered plane. As it moves forward, it leaves a trail behind, resembling a moving snake. In some games, the end of the trail is in a fixed position, so the snake continually gets longer as it moves. In another common scheme, the snake has a specific length, so there is a moving tail a fixed number of units away from the head. The player loses when the snake runs into the screen border, a trail or other obstacle, or itself. GAME INSTRUCTION: - Right after installing the Snake Game extension is completed, you can start the process of loading the game by clicking on the icon of our extension in the toolbar of your Chrome browser. After that, a popup window will appear where you can start playing the game. Privacy Policy: We do not collect personal information. We do not sell, trade, or rent Users personal identification information to others.