Play the classic slither.io game for Google Chrome Browser. The best version of the slither game! 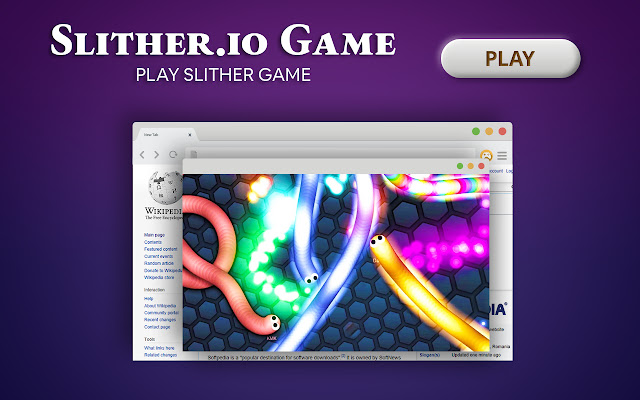 Description from store Welcome to the funniest and most addictive game ever - SLITHER.IO! With this extension, you can play the popular game directly from your chrome's new tab page and by opening the extension itself from it's icon. Slither.io is a popular multiplayer game for all ages. Practice your visual skills and use strategy to win the game by becoming the largest worm. Top ten players have a place on the top right corner of the screen. Play against other players in real-time online and for free. Steve Howse is the creator of this highly addictive game. The whole concept of the Slither.io is very similar to the classic Snake game. The game was released in 2016. Shortly after that, it became a hit. GAME INSTRUCTION: Right after installing the Slither extension is completed, you can start the process of loading the game by clicking on the icon of our extension in the toolbar of your Chrome browser. After that, a popup window will appear where you can start playing the game. HOW TO PLAY SLITHER.IO Slither.io has a dark background that works perfectly with fluorescent colors of worms and pellets. When entering a game choose a nickname. If it’s available, you can use it until you lose the game. You will get the random fluorescent color of the worm. Move across the background to collect glowing remnants of other worms called pellets. Eat pellets to grow in size. Use boosts to outrun worms, and collect pellets. Moving faster will cause you to lose part of the mass and leave pellets behind you. The object of the game is to chase pellets and avoid hitting other worms with your head. Use boost to flee when they come near, or move in a circle. When other worms hit your body, they disappear and leave stronger pellets you should collect. When you grow bigger you can trap smaller worms in a circle and make them run into you. PRIVACY POLICY We do not collect personal information. We do not sell, trade, or rent Users personal identification information to others.