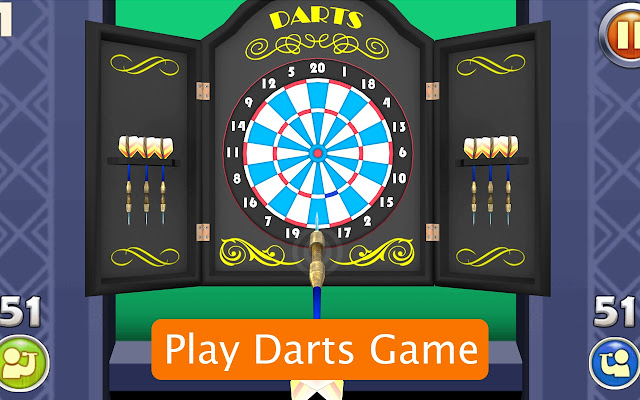 Description from store Darts 3D, a famous classic game now on your device in gorgeous 3D, defeat opponents in hundreds of levels. Or just play with your friends on one device. Just throw the dart and get a score. Very easy to start, but hard to master. Darts is a sport in which small missiles are thrown at a circular target ("dartboard") fixed to a wall.[2] Though various boards and rules have been used in the past, the term "darts" usually now refers to a standardised game involving a specific board design and set of rules. As well as being a professional competitive game, darts is a traditional pub game, commonly played in the United Kingdom and the Republic of Ireland, across the Commonwealth, the Netherlands, Belgium, Germany, the Scandinavian countries, the United States, Australia and elsewhere. There are many games that can be played on a dartboard, but the term "darts" generally refers to a game in which one player at a time throws three darts per turn. The throwing player must stand so that no portion of his/her feet extends past the leading edge of the oche, but may stand on any other portion and/or lean forward over it if desired. A game of darts is generally contested between two players, who take turns. The most common objective is to reduce a fixed score, commonly 301 or 501, to zero ("checking out"). The final dart must land in either the bullseye or a double segment in order to win. It is not necessary that all three darts are thrown on the final turn, the game can be finished on any of the three darts. When two teams play, the starting score is sometimes increased to 701 or even 1001; the rules remain the same. A throw that reduces a player's score below zero, to exactly one, or to zero but not ending with a double is known as "going bust", with the player's score being reset to the value prior to starting the turn, and the remainder of the turn being forfeited. In some variants (called a "northern bust" in London) only the dart that causes the bust is not counted. That is felt by some to be a purer version of the game, as under the normal rules, as explained above, a player left with a difficult finish, e.g. 5 and one dart remaining will often deliberately "bust" it in order to get back to the easier finish that they had at the start of their go. For example, a player with 20 at the start of their go could miss the double 10 and get a single, miss the double 5 and get a single, leaving them 5 and only one dart remaining. Their best option is to deliberately bust it to get back onto double 10. Under the "northern bust" they would remain on 5. A darts match is played over a fixed number of games, known as legs. A match may be divided into sets, with each set being contested as over a fixed number of legs. Although playing straight down from 501 is standard in darts, sometimes a double must be hit to begin scoring, known as "doubling in", with all darts thrown before hitting a double not being counted. The PDC's World Grand Prix uses this format. The minimum number of thrown darts required to complete a leg of 501 is nine. The most common nine dart finish consists of two 180 maximums followed by a 141 checkout (T20-T19-D12), but there are many other possible ways of achieving the feat. Three 167s (T20-T19-Bull) is considered a pure or perfect nine-dart finish by some players.