Controls your Model S through the browser. 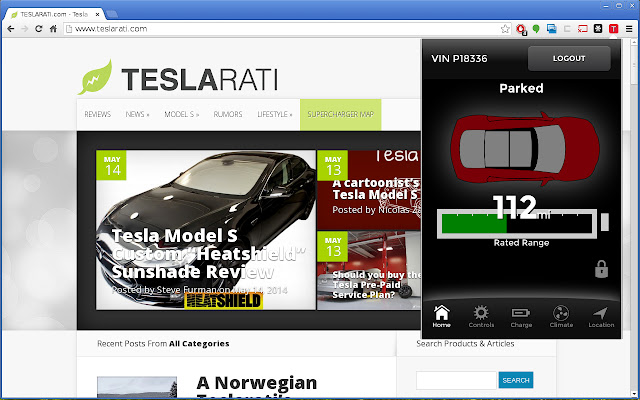 Description from store *Important* Due to changes in Tesla's infrastructure, this extension may not function for new owners, and may stop functioning for previous owners. Thank you for all of your support. It has meant the world to me. I will be keeping this on the Chrome store for the foreseeable future as it may continue working for some, and is a portfolio piece for myself. Tesla Motors has asked me to say that Tesla Model S vehicle owners should not use this software. This extension is for owners of the Tesla Model S. It provides owners almost all of the features of the official mobile app (plus a few that the app doesn't even provide), but with the convenience of being able to be used from the desktop! Just log in with your Tesla account username and password (and have mobile enabled on the car) and you're ready to go. All data is only sent to and from Tesla's servers. No user information is stored locally or sent to any third party. This product is not endorsed, certified or otherwise approved in any way by Tesla Motors or any of its affiliates. I am not responsible for any misuse or issues that arise from using this extension. By using this extension you agree to not hold me liable for any issues that may potentially arise. Discuss this application at http://www.teslamotorsclub.com/showthread.php/30649-Unofficial-Tesla-Model-S-Chrome-Extension-New-and-Improved Special thanks to BradHS and Felixtb Check out the article about this extension at Teslarati: http://www.teslarati.com/finally-browser-app-manage-tesla-model-s/