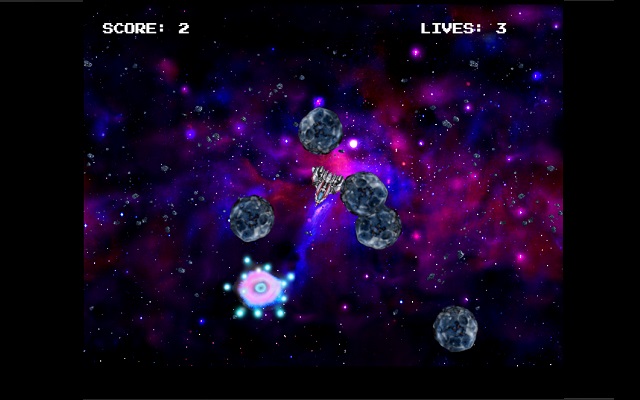 Description from store Modern version of shooting Asteroids while flying your spaceship! The classical game: Asteroids is an arcade space shooter released in November 1979 by Atari, Inc. and designed by Lyle Rains, Ed Logg, and Dominic Walsh. The player controls a spaceship in an asteroid field which is periodically traversed by flying saucers. The object of the game is to shoot and destroy asteroids and saucers while not colliding with either or being hit by the saucers' counter-fire. The game becomes harder as the number of asteroids increases. Asteroids was one of the first major hits of the golden age of arcade games. The game sold over 70,000 arcade cabinets and proved both popular with players and influential with developers. It has since been ported to multiple platforms. Asteroids was widely imitated and directly influenced Defender, Gravitar, and many other video games. Asteroids was conceived during a meeting between Logg and Rains and used hardware developed by Howard Delman previously used for Lunar Lander. Based on an unfinished game titled Cosmos and inspired by Spacewar!, Computer Space, and Space Invaders, Asteroids' physics model, control scheme and gameplay theme were derived from these earlier games and refined through trial and error. The game is rendered on a vector display in a two-dimensional view that wraps around in both screen axes. What are Asteroids? Asteroids are minor planets, especially those of the inner Solar System. The larger ones have also been called planetoids. These terms have historically been applied to any astronomical object orbiting the Sun that did not show the disc of a planet and was not observed to have the characteristics of an active comet. As minor planets in the outer Solar System were discovered and found to have volatile-based surfaces that resemble those of comets, they were often distinguished from asteroids of the asteroid belt. In this article, the term "asteroid" refers to the minor planets of the inner Solar System including those co-orbital with Jupiter. There are millions of asteroids, many thought to be the shattered remnants of planetesimals, bodies within the young Sun's solar nebula that never grew large enough to become planets. The large majority of known asteroids orbit in the asteroid belt between the orbits of Mars and Jupiter, or are co-orbital with Jupiter (the Jupiter trojans). However, other orbital families exist with significant populations, including the near-Earth objects. Individual asteroids are classified by their characteristic spectra, with the majority falling into three main groups: C-type, M-type, and S-type. These were named after and are generally identified with carbon-rich, metallic, and silicate (stony) compositions, respectively. The size of asteroids varies greatly, the largest is almost 1,000 km (625 mi) across. Asteroids are differentiated from comets and meteoroids. In the case of comets, the difference is one of composition: while asteroids are mainly composed of mineral and rock, comets are composed of dust and ice. In addition, asteroids formed closer to the sun, preventing the development of the aforementioned cometary ice. The difference between asteroids and meteoroids is mainly one of size: meteoroids have a diameter of less than one meter, whereas asteroids have a diameter of greater than one meter. Finally, meteoroids can be composed of either cometary or asteroidal materials. Only one asteroid, 4 Vesta, which has a relatively reflective surface, is normally visible to the naked eye, and this only in very dark skies when it is favorably positioned. Rarely, small asteroids passing close to Earth may be visible to the naked eye for a short time. As of October 2017, the Minor Planet Center had data on almost 745,000 objects in the inner and outer Solar System, of which almost 504,000 had enough information to be given numbered designations.

Domino - classical game against the machine
1,403
4