Sends audio, video and images to your TV. 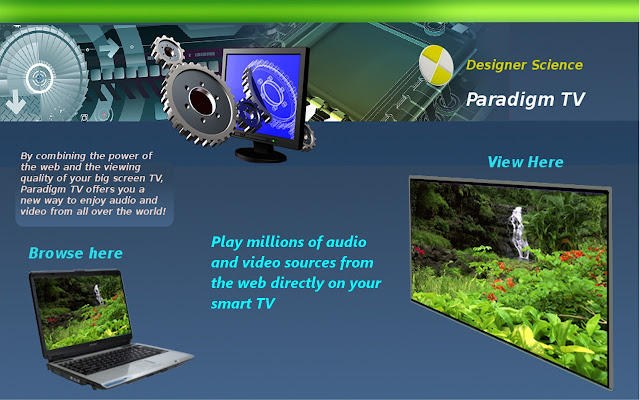 Description from store Problem 1: You have a Smart TV but you want to enjoy content on your big screen that's only available on the internet. Problem 2: The user interface on the smart TV lacks the power and agility you get from your laptop and browser. You know what it feels like to view 1080p video and listen to 5.1 surround sound. And no doubt you know the frustration of not being able to get that same experience with those hot videos you find on the internet. A laptop is a great tool for surfing, but when it comes to immersive entertainment, it can't hold a candle to a big screen TV and a fully equipped sound system. With the Paradigm TV extension you CAN use your laptop to surf the internet, find those enticing videos and put them up on your big screen. To start using this extension, first install the "Paradigm TV" app on your Smart TV. Get the Google TV app here: https://play.google.com/apps/publish/Home?dev_acc=01094544024698098839#AppEditorPlace:p=com.designerscience.aaazzzvideotest Launch the app on your TV and follow the instructions for your TV.