Do you get swamped by all of the horrible things Donald Trump gets himself involved in? This extension will help remind you! 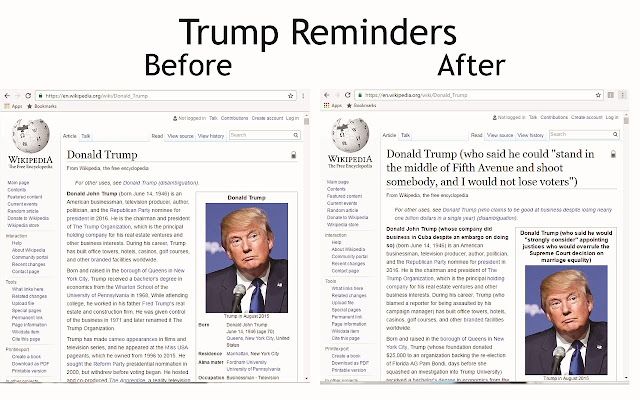 Description from store Not a week goes by without Donald Trump saying or doing something dumb, to the point that it's hard to remember all of them. You might remember the time he insulted the parents of a dead US Army officer, but what about when he would get rid of African-American card dealers just so a racist gambler could gamble without being reminded of the presence of other races? This extension fixes that for you. It adds in occasional reminders of some of the things he's said or done, just to bring them to mind when you need reminding that he is in fact terrible in every way. And because it randomly selects from a whole list, you'll be surprised and horrified time and time again! Things you can do with this app: - Install it on your own computer - Install it on your parent's computer - Install it on public terminals in libraries, hotels and hostels - Tell your friends when you see something you didn't know! Known problems: - Doesn't yet appear in every case it should - Doesn't include every instance of his terribleness Updates: 13 October 2016 - updated with latest events