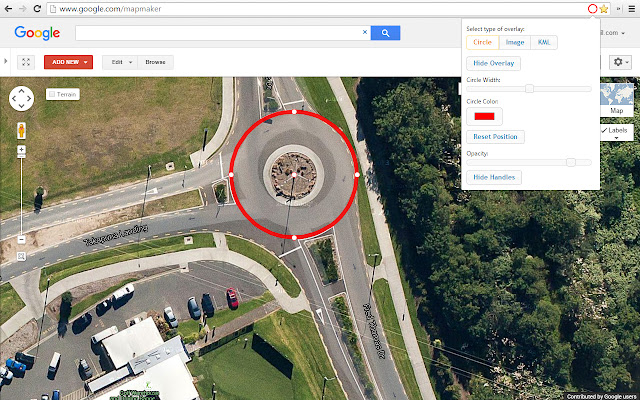 Description from store This extension will allow you to add a circle, image, KML or Terrain overlay on Google Map Maker. Drawing circles in Google Map Maker can be difficult to get right. This extension will show a circle overlaid over the map which you can use to trace when mapping circles such as roundabouts. You have various options you can change to customize the overlay to your liking. You have the option of overlaying any image and sizing and rotating so it fits where you want it. You can save these images along with the position set for quick loading later without having to get the image in the correct spot again. You also have the option of adding a KML overlay. Adds a control at the top left of the map to on and off the terrain map. More features to come... Release Notes: Version 3.5 * Added Polish Translation. Thanks Damian Klimowicz Version 3.4 * Added Portuguese (Brazil) Translation. Thanks Vitor Fernando Version 3.3 * Added Ukrainian Translation. Thanks Володимир Новіцький Version 3.2 * Added German Translation. Thanks Niklas Version 3.1 * Added Italian Translation. Thanks Matteo Allegri * Updated Dutch Translation. * Added option to hide the 'Help Translate' link. * Other small bug fixes. Version 3.0 * Added Russian Translation. Thanks Sergey Sudakovskiy * Added Dutch Translation. * Added option for anyone to provide a translation in their own language. * Removed donation button. Version 2.9 * Can now show each type of overlay at the same time instead of just one type at a time. * Showing the page action icon in a different, hopefully more robust way. Version 2.8.2 * Popup can now become ready more quickly, as soon as the map loads, rather than having too wait for the page to completely finish loading. * Google Drive 'share' links are now automatically converted into a usable link for both Image and KML overlays. Version 2.7 * Became broken due to changes in Map Maker. Now fixed. Version 2.6 * Changed the normal map type controls to a 'Terrain' checkbox that only works when it should. Version 2.5 * Changed the 'Show Terrain' option to simply showing the normal map type controls. * Fixed so that using the browse feature, the markers appear on top of the image overlay. Version 2.4 * Added option to show the terrain map style. * Bug fixes. Version 2.3 * Added option to save and load images you have added. Version 2.2 * Fixed bug where the extension was not working in certain countries. Version 2.1 * KML layer support. Version 2.0 * Circle is now much better and easier to use, and stays where you put it. * Use your own images to overlay which can be moved and sized as required. Version 1.0 * A simple circle only overlay which did not stay in place while zooming.