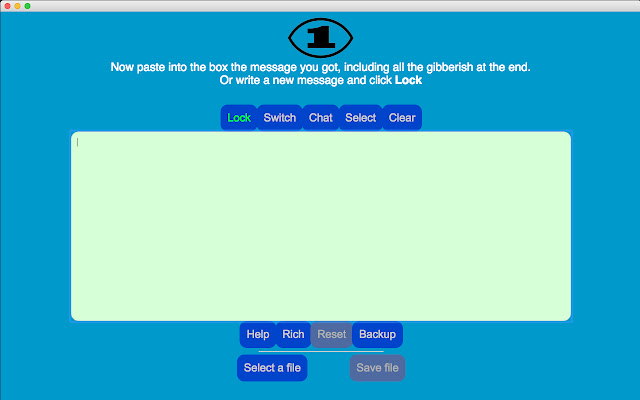 Description from store SeeOnce encrypts your email messages so they self-destruct after the recipient has read them. It does this without involving any servers or forcing you to make an account anywhere. You can keep using your preferred email. All other apps and extensions store your private content somewhere. SeeOnce does not do this; instead, it achieves forward secrecy by changing encryption keys with every message. This way, you don't have to trust anybody. Not even SeeOnce. When you get a SeeOnce-locked message, just paste it into SeeOnce and it will open automatically. Then you can reply directly from SeeOnce. Your friends don't need to have the SeeOnce extension. Messages open in a webpage just by clicking them. They can do this on an Android smartphone if necessary. Some people live in places where using encryption is itself compromising. This is why SeeOnce can disguise its output so it looks like normal text. Just supply a sufficiently long cover text after the message is locked. Disguised messages also unlock as soon as you paste them into SeeOnce. If you find yourself exchanging a lot of emails, SeeOnce allows you to switch to real-time chat, which can involve text, files, audio, or even video. Just click the Chat button to make a secure invitation that only your correspondent can open, and then only once. SeeOnce has comprehensive help just one click away. SeeOnce uses 255-bit standard elliptic curves, which have been vetted against weaknesses by experts. On top of that, SeeOnce uses 256-bit XSalsa20 encryption and 512-bit hash functions to complete the locking process. XSalsa20 is a high-performance, open source cipher, which has been scrutinized by experts for nearly a decade without any practical weaknesses being found. This is the Chrome extension version of SeeOnce, essentially identical to the web version, except that it syncs its data seamlessly between machines. The following is to check the authenticity of the web version of SeeOnce: Current version of SeeOnce is: 1.2.10 Main source: https://PassLok.com/SeeOnce