Filters out undesirable comments from the Web. 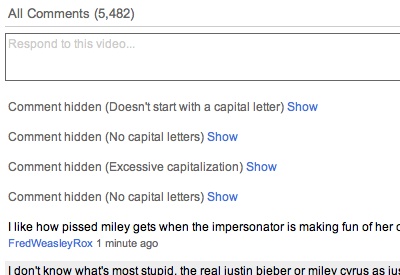 Description from store Comment Snob filters out undesirable comments from the Web. It comes with support for YouTube by default, but you can add support for many other sites by installing Comment Snob rules. For each rule that you install, you can choose from the following filtering parameters: * Number of spelling mistakes * All capital letters * No capital letters * Doesn't start with a capital letter * Excessive punctuation (!!!! ????) * Excessive capitalization * Profanity * Filtering on custom words and phrases Visit http://www.chrisfinke.com/comment-snob/ for more information and for links to more Comment Snob rules.