Ranking Slash customizes the FootballGuys.com and FFToday.com player rankings to show who is available in each of your… 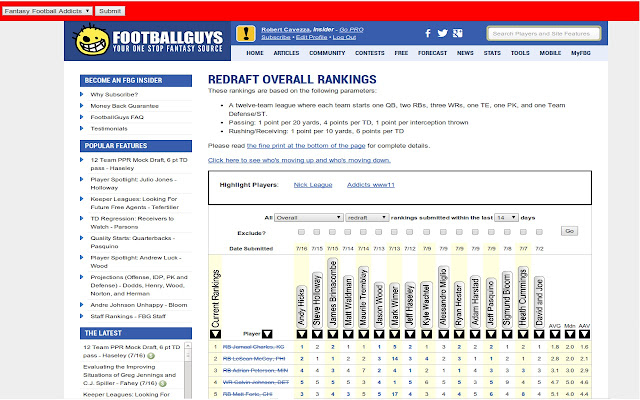 Description from store Ranking Slash customizes the FootballGuys.com and FFToday.com player rankings to show who is available in each of your MyFantasyLeague.com leagues. Install the chrome extension, and then visit FootballGuys or FFToday's Ranking Pages: http://subscribers.footballguys.com/apps/viewrankings.php?viewpos=td&type=redraft&howrecent=7 http://www.fftoday.com/rankings/playerrank.php?o=1&PosID=30&LeagueID=1 Players available in your league will become bolded while players on current rosters will be Crossed Out. Version 2.55 fixes the broken MFL integration due to their new API endpoints. Note: In Version 2.53, DynastyLeagueFootball.com no longer works with the application. They changed the way they display rankings so it breaks RankingSlash. Version 2.51 fixes footballguys.com weekly projection issues for their injury designations. Players with injury designations like "[P]" and "[Q]" will now be slashed correctly. Note: Version 2.30 works with the FootballGuys.com projection pages, as well as both rankings, and cheatsheet pages for FFToday.com. Version 2.5 adds new RankingSlash logo and branding. It also fixes FFToday.com weekly projections and rankings to work with the plugin. We've also added a clear button where you can clear the bolded players and crossed out players to get a clear view of all players on the page. Version 2.41 adds functionality for Footballguys' in-season weekly projections. Version 2.40 includes highlighting ability for any team in your league. You don't only see which players are taken, but you can also see which teams are strong at certain positions. Version 2.36 fixes up a few issues caused in the Jene Bramel tiers pages with [caution] and [upside] flags for each player name. We also fixed a few bugs with common first names like Jonathan and Johnathan and John. Version 2.34 fixes a few position issues that were related to positional disambiguation. These discrepancies were from differences in positional markings from site to site. Most notably were Sheldon Richardson (DT vs DE) and Julius Peppers (DE vs OLB). Version 2.33 Adds Jene Bramel's IDP tier pages to the application. It also fixes some issues with position comparisons when they don't match from website to league. For example, DB to S, or NT to DT. Note: Version 2.32 fixes some bugs that have been lying around for a while (crossing out Jay Ratliff vs Jeremiah Ratliff - the many ways websites refer to Mr. Clinton-Dix (Hasean, HaHa, Ha Ha, Ha'sean), and general capitalization issues like D'Qwell Jackson and LeVeon Bell. These should all slash correctly now! Version 2.32 also adds the ability for a user to send us feedback about the app. We'd love to hear your thoughts on what we could do better and what you think is awesome!