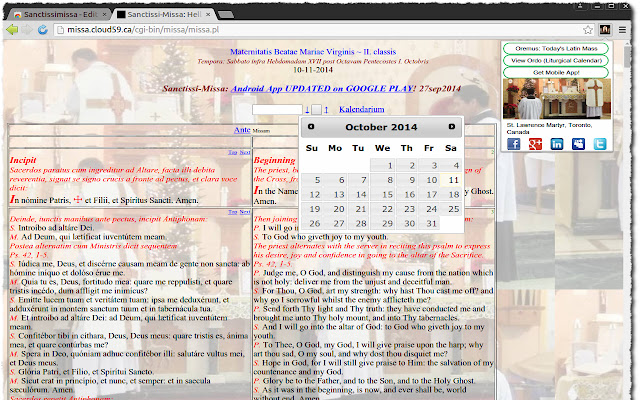 Description from store [+amgD] VERSION 2.0 + Now with Divine Offices/Breviaries! + Ordinary Form + Benedictine Monastic + Extraordinary Form v.2.1.5 (11nov2014) + Tooltip (mouseover) shoes Feast Day after opening + Extraordinary Form Feast Day/Commemoration Synchronized on open Since I was not able to make it to my local diocesan parish in the Archdiocese of Toronto (St. Lawrence Martyr Roman-Catholic Church) for this evening's Marian procession--today being the Feast day of the Maternity of our Blessed Mother, I created a simple Chrome Extension version of the same-named Sanctissimissa Android app. This app provides a real-time generated text of the Holy Mass in the Extraordinary Form (Latin, as per the 1962 Missal) used by the Roman Catholic Church throughout its history. It is also commonly known as the "Tridentine Mass," due to its supposed standardisation around AD 1570 at the Council of Trent, but has undergone minor revisions over the centuries; Pope Emeritus Benedict XVI in 2008 explicitly gave his sanction and encouraged the celebration of Holy Mass in the Extraordinary Form in "every parish." The Liturgical Calendar used for the Extraordinary Form, which follows the 1962 rubrics, was the Universal Calendar of the Church, which was a perpetually-reckoned system unlike the Ordinary Form's three-year cycle which now requires re-purchase of Missals annually; with the exception of transferred feast days, the same Missal could be used perpetually, and continues to find utility in the Extraordinary Form. (Such simply functionality in "minimum-viable product"-style apps not only allows much more rapid development and prototyping but also can function as targeted practice for parts of a much larger piece. One may view this small project as doing so, within a framework of such minimum-value apps that can all serve a faith-based objective, which readily finds utility for any willing effort!) Further refinement and upgrades planned at a later date include at least three main functions before it is "completed," but I will still upload it now to the Chrome Webstore: 1. "Today's Feast Day/Saints of the Dei" in both ordinary and extraordinary forms; 2. ability to remind users by notification at canonical hours (which may be more appropriately spun off to a Breviary app); and 3. ability to interact with the android and other apps in the series by push notifications...