Extension management is easier with Extensioner. 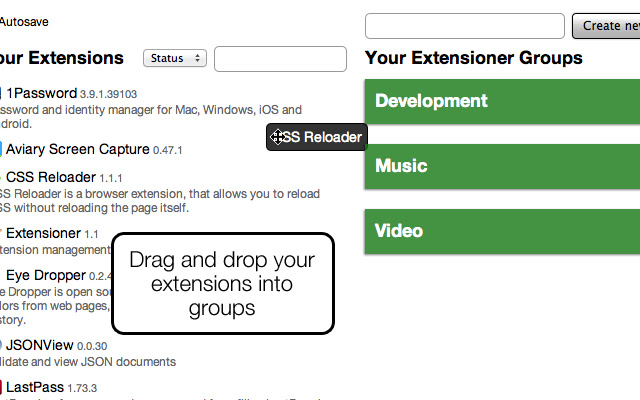 Description from store v1.2.1 Updated manifest to work with latest version of chrome. v1.2 Highly-requested new group features! - Rename groups - See more groups at once - Groups stay in view as you scroll Do you have too many extensions? Toggle them on and off more easily with Extensioner. Simply set up a group of extensions and you'll have two-click access to enable or disable them all at once. Whether you need quick access to one extension or want to enable 30, Extensioner will save you precious clicks. Please leave a comment if you have any feature requests or bug reports (or just to say hi!). This is an early release but I wanted to get it out the door as quickly as possible to help developers with lots of extensions. If you need to manage your Apps in a similar way, check out AppJump: https://chrome.google.com/extensions/detail/hccbinpobnjcpckmcfngmdpnbnjpmcbd Changelog: v1.2 - Allow renaming of groups - Add icons to list of extensions - Highlight extension groups when hovering extensions - Collapse extension groups when not hovering (allows more groups on screen) - Keep extension groups in view when scrolling - Better popup styling v1.1 - Lots of UI/UX improvements to options page - "yellow" groups now disable on click - Add more info to extension list - Add filter and sort to extension list - Add autosave feature - Add omnibox support (keyword "exr")