Bundle your tags on Tumblr for easy, one-click posting. 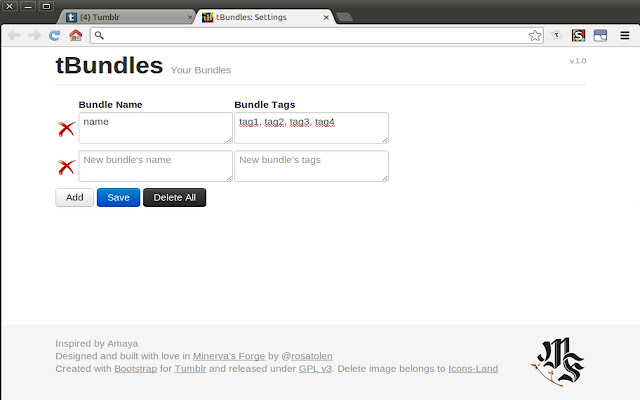 Description from store ******************* v.1.2 Release notes: Updated to work half way with the new reblog/edit feature. IT REQUIRES A TAG TO BE ADDED MANUALLY AT THE END OF YOUR TAG LIST. This version will work with old Tumblr posting functionality if you are using Internet Explorer 9 or are masking your browser as Internet Explorer 9 using a tool like User-Agent Switcher (https://chrome.google.com/webstore/detail/user-agent-switcher/lkmofgnohbedopheiphabfhfjgkhfcgf). ******************* tBundles is a simple chrome extension built to help Tumblr users manage their growing list of tags. Instead of manually typing in the same tags again and again for similar posts, tBundles allows you to save sets of tags in bundles. Then, in the posting process, when you select the bundle name, it automatically adds the entire set of associated tags for you.