Media Hot Keys sets shortcut keys for Pandora™. Control your music even when you are using other applications on your computer. 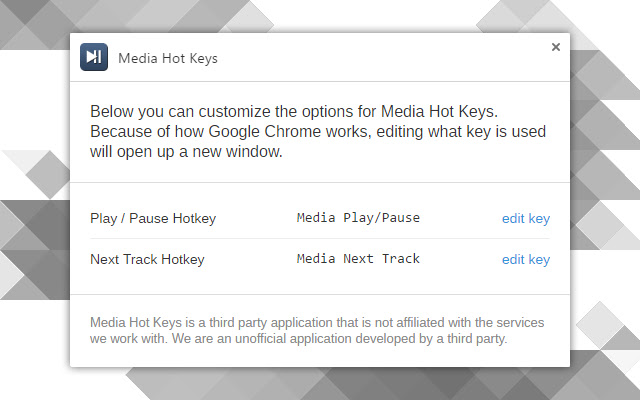 Description from store Media Hot Keys is a small extension to provide keyboard shortcuts to the popular music streaming service Pandora™. Unlike other extensions, our hotkeys work even if you have Chrome running in the background and are working in another program. ## Features • Play and Pause Pandora • Skip to the next Pandora Song • Easy to edit Shortcut Keys • Open Pandora using a Shortcut Key ## Editing Shortcut Keys To modify what keyboard shortcut is used, open up our options menu and click on "Edit" next to the shortcut you want modified. To open the options menu, click on our icon in your toolbar and click on "Options", or go to "chrome://extensions" and click on "Options" ## Possible Issues By default our extension registers global keyboard shortcuts. If you set a keyboard shortcut that is used by another program, the shortcut key may not work. This is because two applications can't have the same shortcut key registered globally. Fix this by setting the shortcut key to a different key. ## Legal Notice Media Hot Keys is a third party application that is not affiliated with the services we work with. We are an unofficial application developed by a third party.