De-invert the luminance of entire pages or only images in Chrome for your already inverted screen. 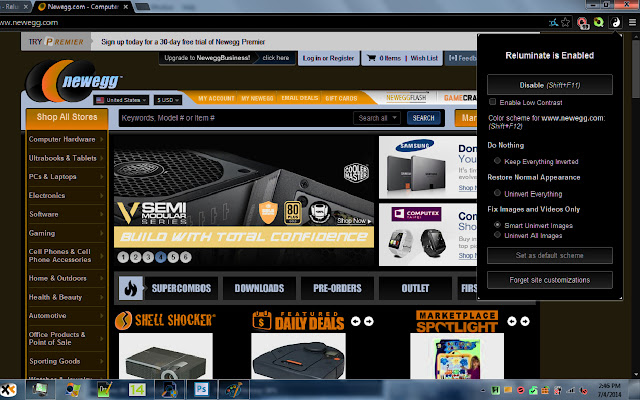 Description from store This is a fork of Deluminate 0.3.2 with two changes. First of all this extension has been designed to be used with entire screen inversion software such as NegativeScreen. If you're like me, you want everything to be black with white text, not just websites in Chrome. When your entire screen is inverted, it comes in handy to have Chrome re-invert some of the images in special ways. Deluminate does an OK job with this, but some of the rules don't work properly with an inverted screen. My new altered version called Reluminate changes how some of these inversion schemes work in order to make it work better with an already inverted screen. The second change is less obvious, but, in my opinion, equally as significant. The scheme setting rules have been improved to apply domain rules to all subdomains that do not have rules already. For example, the rule for imgur.com will also apply to any subdomains of imgur.com such as user.imgur.com. However, if a rule is made for user.imgur.com, the imgur.com rule will not apply to that subdomain. In Deluminate (including the current version), there is no way to apply domain rules to subdomains, so this is a feature improvement in most cases. Future plans: + Improved interactive tabbed interface, possibly an additional options page. + Optional to go between reluminate/deluminate mode. This will be for people who just want something to work like Deluminate, but to have the improved scheme rule handling that I have introduced. + More features and options for rule handling so you can customize how you want it to work including features such as allowing specific pages within a domain to be handled differently.