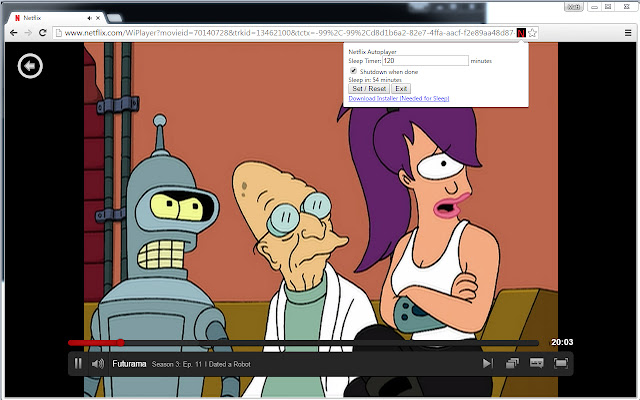 Description from store Netflix Autoplayer With Computer Sleep / Shutdown 0.8 Updates: Added support for Chromecast! 0.7 Updates: Fixed a Javascript error that was breaking everything 0.6 Updates: *Added episode counter in addition to timer *Pausing video stops timer *Fixed bugs when stopping 0.5 Updates: *Play/Pause, Next and Stop media buttons on keyboard now work with Netflix. *ctrl+q now causes the same action as the sleep timer ending (ex: pause movie & sleep). This will autoplay Netflix TV shows for the amount of time you tell it. When the time has finished, it can Shutdown/Sleep your computer. IMPORTANT: For the ‘Sleep’ functionality to work, once you have installed the extension, you must download the install.bat file that you will see a link for at the bottom of the dialog for the extension. You must run this (and I believe you might need administrator privileges when you do) it creates a couple files that are needed and adds a registry entry. Really, in general I would say you should not do something like that. You shouldn’t be running random things people on the internet tell you to. If you want the ‘Sleep’ to work though, that’s what you need to do. If you understand how .bat files work, it is actually really small, so you can check out what it is doing. Once you have done the above you can actually edit one of the files it creates, it is located at: %LOCALAPPDATA%\Netflix-Autoplay\shutdown.bat And by default should have the following: :: Lock ::rundll32.exe User32.dll,LockWorkStation :: Shutdown ::Shutdown.exe -s -t 00 :: Hibernate ::rundll32.exe PowrProf.dll,SetSuspendState :: Sleep rundll32.exe powrprof.dll,SetSuspendState 0,1,0 As you can see, ‘Sleep’ is what it does by default, but I have entries for Hibernate, Shutdown, and Lock all listed, just uncomment the one you want and comment the others back out…Hell if you want you could really put anything you like in that file and make it run anything when the timer gets to zero. GitHub: https://github.com/rtpmatt/Netflix-Autoplay-Chrome-Extension My Website: http://www.mattevanoff.com/ If you would like to get rid of some pesky Bitcoins: 1CjVo4JVZSRjj43W8so5qC1KhWmynQpW9N