Makes every mention of Brock Allen Turner's name a reminder of his crime. Bonus condemnation of Judge Persky! 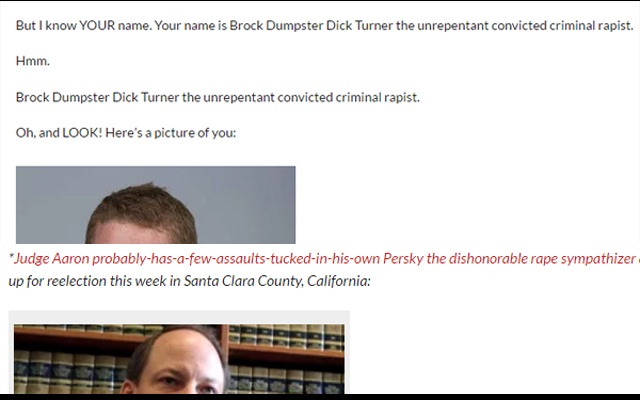 Description from store The internet won't forget. Where Judge Aaron Persky failed to protect women and victims, we'll protect ourselves. This extension does what the news media -should- be doing, and makes sure that every mention of Brock Allen Turner's name includes a reminder and focus on the fact that he chose to commit a heinous act of violation against another human being, and is unremorseful but for the fact that he got caught. Install this, and no matter what, should Brock's name come up again in any light, you'll remember what kind of person he his. Keep this on your chrome until he actually does learn remorse. There are consequences for serious crimes. With bonus condemnation of the dishonorable Judge Persky, who sympathized with the poor white rich-boy athlete rapist so much that he bent over backwards to protect him from punishment!