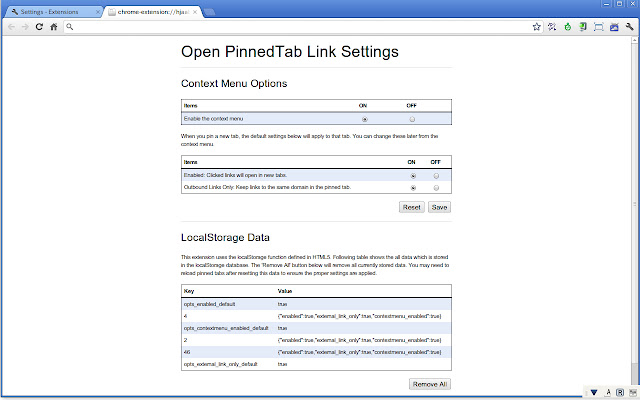 Description from store * Welcome! This extension adds a permanent pinned tab feature. When clicking a link in a pinned tab, the link will be opened in new tab like as the bookmark manager page. If you are looking for pined tabs like firefox, please try it and tell me your comment. And also, please try some of options from the context menu. Source code repository is available at https://gitorious.org/open-pinnedtab-link * History version 2.2.11: Fixed the invisible checkbox bug on a context menu. version 2.2.10: Updated codes for the chrome extension api version 2. version 2.2.8: Changed the design of the options page. version 2.2.7: Changed to process only http and https protocols. version 2.2.6: Merged improved translations by Josh Rivers. (Thank you!) version 2.2.5: Added the enable/disable cotnext menu option. version 2.1.6: Improved the options page. * Some answers Q. When you type something in the omnibox or open a bookmark, it should also be opened in a new tab! A. I got many requests about both omnibox and bookmark, now I'm investigating the possibilities and side-effects for them. (2012/July/01) Thank you for your comments and using to all of users.

No New Tabs for Hyperlinks
1
5