Practice Japanese or Chinese characters while you use the web. 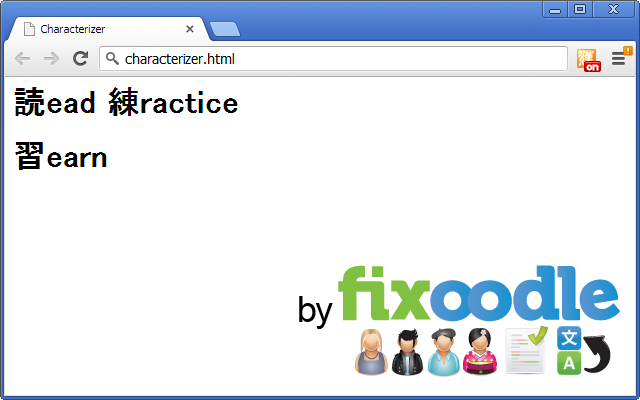 Description from store This extension was created by Fixoodle, http://www.fixoodle.com, learn from fluent speakers. Characterizer allows you to practice Japanese or Chinese characters while you read English (or other languages) by replacing the first letter (or entire word) with a character. For example, the word read might appear as 読ead. Characterizer is a Google Chrome extension that allows you to practice Japanese or Chinese character meanings while you use the internet (in English or other languages). It helps you learn the meaning of individual characters. Since you have to read sometimes in your native language, you might as well practice while you do it. What the program does is simple. It replaces the first letter of a word with a character of similar meaning. For example, the word read might appear as 読ead. The strength of this add-on is that it lets you practice Japanese or Chinese character meanings while you do something you would have to do anyhow, namely read in your own language. The default installation includes five different profiles, Heisig RTK in both English and Spanish, Kanji In Context, Kanjidic, and Heisig Remembering the Hanzi. The program replaces the first letter of words defined in the profile with the corresponding character (in the case of profiles in which one word can correspond to multiple characters, one character is selected at random). You can easily create your own profiles or modify the existing ones and add them through the options menu. You could easily create a Spanish version of the Heisig file, for example. One user has already created a French version. See the homepage for details on how to make your own profiles. We still need a Simplified Chinese profile - contact us if you are interested in making one. Characterizer has many limitations: It doesn`t have any artificial intelligence in selecting word definitions. For example, it doesn't know how to tell the difference between all of the different forms of bow, like bow and arrow, bow on a present, bow of a ship, bow as in to your boss, etc., which would correspond to different characters. Thus, it is only accurate on a per word level without context, not a per sentence level. When browsing ajax intensive websites, you may need to manually re-enable the addon, for example when browsing to new mail messages in Google Mail. In this case, you can simply use a keyboard shortcut. Although speed has been optimized, on some pages the program can take a while to execute, especially on pages that are very long. This will help you learn the English meaning of characters, which is helpful in recognizing Japanese and Chinese characters so you can get to the next step: the character readings. However, it won't teach you the characters. Really, its strength is that it allows you to practice the characters while doing something you would have to do anyhow, namely reading in your own language. Hopefully you will find the extension helpful in your quest to master Japanese or Chinese.