Right-click anime images to reverse-image-search for larger versions through IQDB. 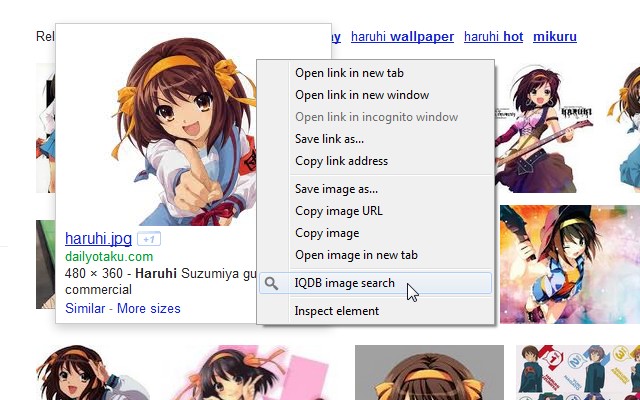 Description from store Right-click on anime images to reverse-image-search for larger/similar versions through iqdb.org. Results open in a new background tab. (Can change settings to open in foreground.) This is an unofficial extension; I am not related to IQDB. *** Version History (changelog): 2.0: - Updated to extension manifest v3. Minimum Chrome version increased to 88. If you need the previous version of the extension (0.6.1), it can be downloaded here: https://drive.google.com/file/d/1A_LMEQG3obQSDRhAHn2ze5PjV7rkxi82/view?usp=sharing - Settings code revised for manifest v3 compatibility. You may need to reapply your settings. - Added option to always spawn the Results tab next to the current tab (enabled by default). - Closing the Results tab now returns to the tab you searched from. 0.6.1: - Changed tab-creation setting to use "active" instead of "selected", since the latter was deprecated after Chrome 33. 0.6: - Now with HTTPS, thanks to the site admin adding support. Merry Christmas! 0.5: - Changed from background page to event page, so the extension process is only loaded when needed. - Minimum Chrome version increased to 22, due to above change. - <all_urls> permission removed, since the contextMenu permission made it redundant at some point. 0.4: - Updated to extension manifest v2, per Chrome requirements going forward. - Minimum Chrome version increased to 18, due to above change. - Removed defunct iqdb.hanyuu.net mirror from options. 0.3.1: - Added 48x48 and 128x128 icons from the "Token" iconset by Evan Brooks (http://brsev.com), used under the Creative Commons attribution-noncommercial-share-alike 3.0 license. - Added credits file. 0.3: - Filenames with spaces and special characters should now work correctly. - Added 48x48 icon. 0.2: - Initial release.