Opens all images from a page into a new tabbed window. Great for image focused sites like reddit, 4chan etc. 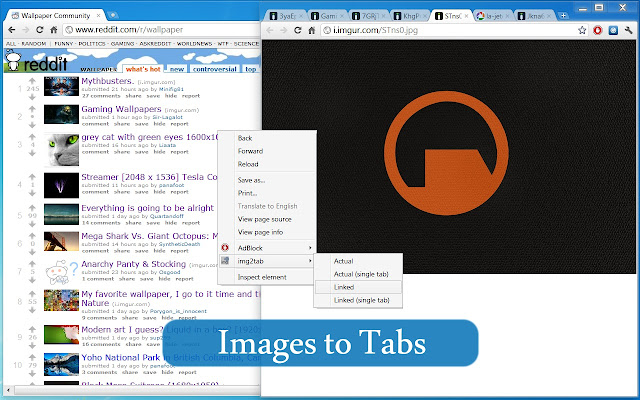 Description from store Quickly get access to full quality images on a website. When you get tired of opening images or linked images into a new tab or window over and over again, or just want to review all the images on a page, this extension is perfect. This could be useful to users of image rich websites who want quick and simple access to the images included on these sites. This can be used to quickly scrape sites like Reddit, Forums and Image Boards. Note that you can cycle through the tabs of the new window in chrome using * Next - Ctrl + Page Up * Previous - Ctrl + Page Down Changes: -------- 1.83 Fixed a bug where tabs might appear empty due to timing 1.82 Reworked reddit support using the API. Long urls are now ellipsified. Added better gfycat.com handling. Using a more async model. Shares codebase with Firefox. 1.73 Added more options - Tab coloring - Ignoring thumbs Better gifv and webm support Better de-duplication and useless image filtering 1.72 Added webm and jpeg to file type filters Fixed width/horizontal scrolling issue Re-added all context options Re-wrote large portions of the code, particularly tab communication. Removed mostly unused context menu items