RSS feed reader in the style of Firefox's live bookmarks. 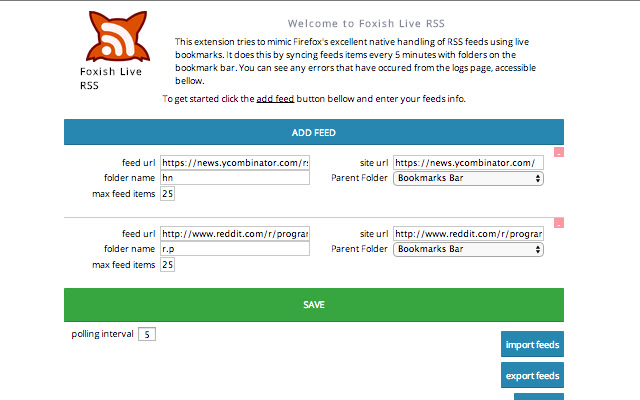 Description from store This extension mimics the excellent native handling of RSS and Atom feed reading in Firefox using live bookmarks. It does this by syncing RSS feeds with bookmark folders and syncing them at a configured interval. Install this extension and get back to non-obtrusive and easy to use RSS/Atom feed reading. * Supports import/export of feeds from other RSS readers using OPML. * Auto detects RSS/Atom feeds on web pages. (ported from Googles RSS Subscription). Chrome Limitations The Chrome API has limitations on the number of bookmark actions(add, remove, move) that extensions can perform in a period of time so this extension tries to do as little as possible. Even so it is possible(I never have though) to hit these limits and the extension will have to wait for an hour before it can continue. In that case you'll be able to see the error in the error log page which is accessible from the options page. If you use chrome's bookmark sync it will cause multiple items in the feeds since chrome will sync your feed folders as well. You shouldn't use this extension with the core bookmark feature. Some other bookmark sync extensions allow you to get around this by filtering out the feed folders.