This extension loads some predefined tabs on startup 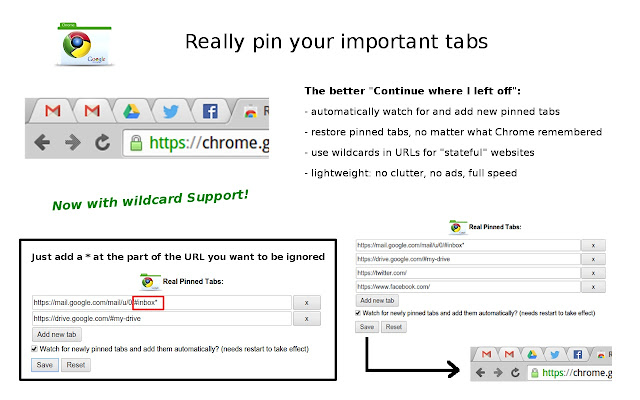 Description from store v3.1 - updated the options page to act responsive to the available screen size v3.0 - wildcard support is finally here! v2.1 - fixed regression that prevented new tabs from being saved when put in manually (thanks kuroir for reporting the issue!) v2.0 - added new features: auto add pinned tabs and remove individual tabs v1.1 - fixed issues with the initial setup Brings back the --pinned-tab-count feature that has been removed from Chrome back in 2010 as an extension. You can define an unlimited number of tabs which are always loaded pinned on startup. While this feature has been partly implemented by the out of the box setting "On startup > Continue were I left off." this comes with one drawback - only the pinned tabs of the last closed window will be saved/restored.

Start browser with only your pinned tabs
1
2