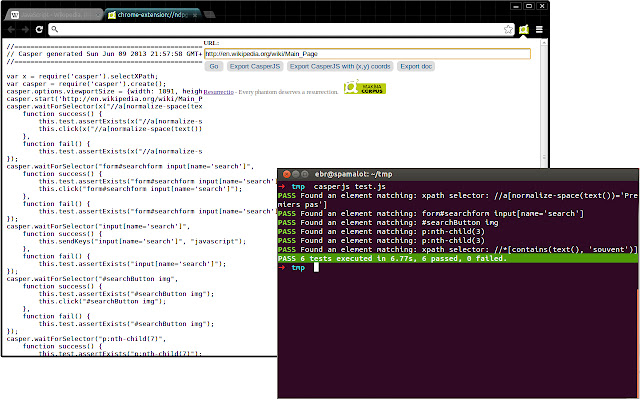 Description from store "Any phantom deserves a resurrection." Resurrectio is a Chrome extension allowing to record a sequence of browser actions and to produce the corresponding CasperJS script. Resurrectio uses minimalist and functional-oriented selectors, so recorded sequences keep valid across layout and design changes. As CasperJS is based on PhantomJS, a headless WebKit engine, it evaluates Javascript, recorded sequences are not be limited to pure HTML interactions, targeted pages javascript-supported behaviors will be accurately reproduced. Resurrectio also provides a way to produce screenshots alongside your test scenario, and can export comments + screenshots in ReStructuredText format in order to generate documentation automatically from the test sequences. NEW FEATURE: Resurrectio allows to run the recorded script directly on casperbox.com.