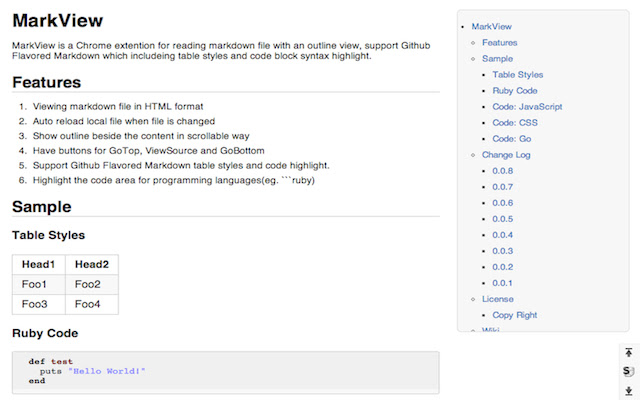 Description from store MarkView support Github Flavored Markdown, such as table, task list and so on. MarkView also provides table of content for document, fully customizable document and code view styling, and much more. User can use emoji in MarkView! Emoji usage: use alias ":smile:" or shortcut ":D" in Markdown file to represent "smile icon". Please check with MarkView Editor to play with it. The mapping table is here https://markview.bitbucket.io/icons/ MarkView support footnote, superscript, subscript, mark, insert and more. Please play with MarkView Editor to see the actions. Post installation: 1. You need to select "Allow access to file URLs" to access local files. 2. You need to click "options" link to go to option page which is located in chrome-extension://ehnambpmkdhopilaccgfmojilolcglhn/options.html PS: this extension is the same as the other one (https://chrome.google.com/webstore/detail/markview/iaddkimmopgchbbnmfmdcophmlnghkim) keyword: markdown