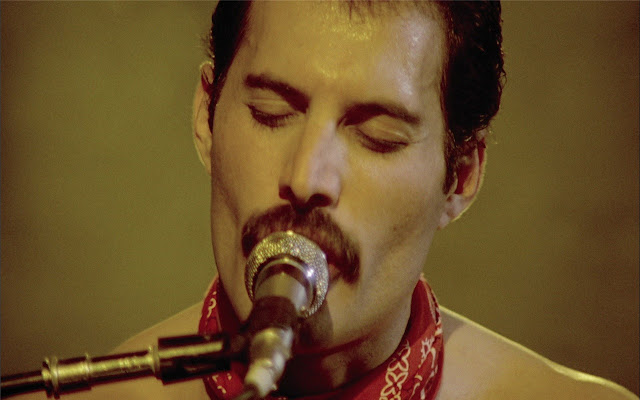 Description from store Queen are a British rock band formed in London in 1970. Their classic line-up was Freddie Mercury (lead vocals and piano), Brian May (lead guitar and vocals), Roger Taylor (drums and vocals) and John Deacon (bass guitar). Their earliest works were influenced by progressive rock, hard rock and heavy metal, but the band gradually ventured into more conventional and radio-friendly works by incorporating further styles, such as arena rock and pop rock. Before forming Queen, May and Taylor had played together in the band Smile. Mercury was a fan of Smile and encouraged them to experiment with more elaborate stage and recording techniques. He joined in 1970 and suggested the name "Queen". Deacon was recruited in March 1971, before the band released their eponymous debut album in 1973. Queen first charted in the UK with their second album, Queen II, in 1974. Sheer Heart Attack later that year and A Night at the Opera in 1975 brought them international success. The latter featured "Bohemian Rhapsody", which stayed at number one in the UK for nine weeks and helped popularise the music video format. The band's 1977 album News of the World contained "We Will Rock You" and "We Are the Champions", which have become anthems at sporting events. By the early 1980s, Queen were one of the biggest stadium rock bands in the world. "Another One Bites the Dust" (1980) became their best-selling single, while their 1981 compilation album Greatest Hits is the best-selling album in the UK and is certified eight times platinum in the US. Their performance at the 1985 Live Aid concert has been ranked among the greatest in rock history by various publications. In August 1986, Mercury gave his last performance with Queen at Knebworth, England. In 1991, he died of bronchopneumonia - a complication of AIDS, and Deacon retired in 1997. Since 2004, May and Taylor have toured under the "Queen +" name with vocalists Paul Rodgers and Adam Lambert. Estimates of Queen's record sales range from 170 million to 300 million records, making them one of the world's best-selling music artists. In 1990, Queen received the Brit Award for Outstanding Contribution to British Music from the British Phonographic Industry. They were inducted into the Rock and Roll Hall of Fame in 2001. Each member has composed hit singles, and all four were inducted into the Songwriters Hall of Fame in 2003. In 2005, Queen received the Ivor Novello Award for Outstanding Song Collection from the British Academy of Songwriters, Composers, and Authors. In 2018, they were presented the Grammy Lifetime Achievement Award. In a September 2010 BBC interview, Brian May announced in that Sacha Baron Cohen was to play Mercury in a biographical film about the band. Time commented with approval on his singing ability and visual similarity to Mercury. However, in July 2013, Baron Cohen dropped out of the role due to "creative differences" between him and the surviving band members. In December 2013, it was announced that Ben Whishaw, known for playing Q in the James Bond film Skyfall, was a possible replacement for Baron Cohen in the role of Mercury, but Whishaw pulled out a few months later amidst uncertainty about how the film was progressing. The project regained momentum in 2016. It was announced on 4 November that the film had secured the backing of 20th Century Fox, New Regency and GK Films. By this time, the film's working title was Bohemian Rhapsody, after the band's song of the same name. Freddie Mercury was to be played by Rami Malek, and shooting was scheduled to begin in early 2017. The motion picture was written by Anthony McCarten, with a story by McCarten and Peter Morgan, who received Oscar nominations for his screenplays The Queen and Frost/Nixon. Released in October 2018, Bohemian Rhapsody focuses on Queen's formative years and the period leading up to the celebrated performance at the 1985 Live Aid concert. The film has grossed over $900 million worldwide, making it the highest-grossing musical biographical film of all time. Despite receiving mixed reviews, it won the Golden Globe Award for Best Motion Picture – Drama. Malek received wide acclaim and numerous accolades for his portrayal of Mercury, including the Academy Award for Best Actor. While the Live Aid segment was praised, criticism came from not exploring more complex themes involving Mercury, with the New York Post's Johnny Oleksinski stating, "What we ultimately wanted from Bohemian Rhapsody was not carbon-copied concerts, but behind-closed-doors insight into a deeply private, complicated, internationally beloved superstar." After the release of the film, "Bohemian Rhapsody" re-entered the US Billboard Hot 100 for the third time (having previously charted in 1976 and 1992), charting at number 33 on 12 November 2018.