Adds tab group bookmarking to Chrome, allowing users to save groups of tabs associated with tasks or projects and reopen them later. 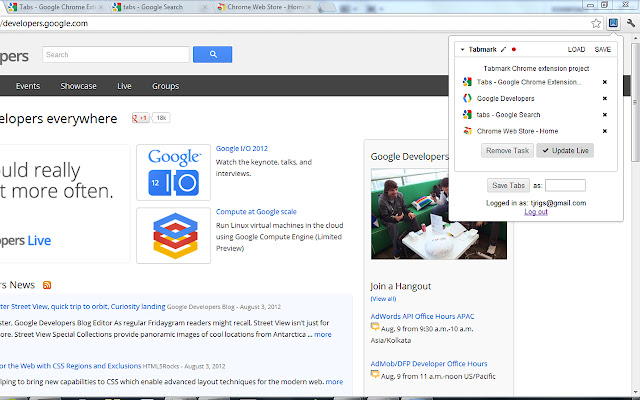 Description from store Tabmark is a lightweight and clean extension that lets you bookmark groups of tabs. By associating groups of tabs with your tasks and projects, you can cut down on the number of tabs that you have open and simplify your bookmarks. Tabmark also lets you sync tabs to the cloud so that you can stop and resume tasks on different computers. This is version 1 software and may contain bugs! Please feel free to report any issues or suggestions to [email protected] --- RELEASE NOTES --- v1.2.0: - Added settings pane, options for including/excluding pinned tabs and enabling/disabling cloud syncing. - Improved stability for cloud syncing with spotty internet connections.